Motorola and Verizon aren’t wasting any time this holiday season and are about to unleash another full lineup of DROID’s on the world. We know they are coming but lately more pictures have popped out of both the DROID 4 with its 5 row QWERTY keyboard, and the new DROID XYBOARD tablets (Xoom 2). Today we get a closer look at all of these devices, especially the slightly newer DROID 4.

The DROID 4 was first spotted back in October and latest rumors suggest a December 8th launch — hopefully along side the Galaxy Nexus. We know plenty about the awesome DROID 4 already and it will be the first DROID QWERTY slider to pack 4G LTE. Pair that with a 5 row edge-lit keyboard for easy typing this could be the best QWERTY smartphone yet — for those that like that sort of thing. We are still hopeful for a early December launch for the D4 and it’s dual-core processor but will update when we hear anything official.

Then we have that oddly named set of tablets known as the XYBOARD. If you were still on the fence as to whether or not that was the official name after last nights report then maybe the image below clearly showing “XYBOARD 10” will make you feel at ease. I’m not so sure I like the name and sadly they only have dual-core processors and Android 3.2 Honeycomb but we should see ICS land on these tablets shortly after launch. 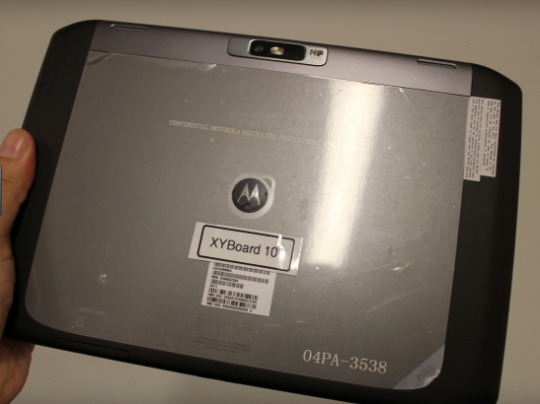 Pretty? Ugly? Good name or bad name? What do you guys think? Oh and take a look at the images at the source link below. Are those “blur” icons on the XYBOARD tablet? — sadness. Anyways We’d love to hear all your thoughts in the comment section below.