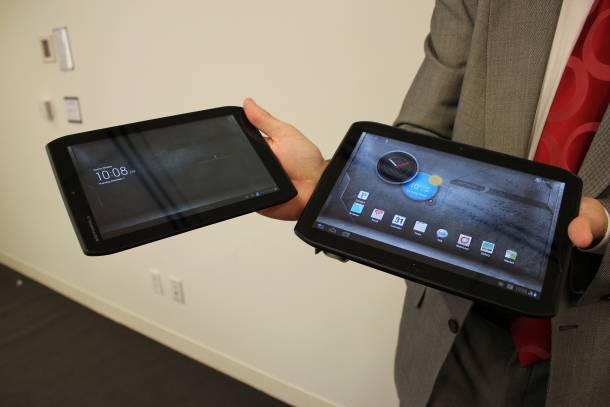 We though “XOOM 2” was a pretty good name for a the tablet that replaces the original Honeycomb device, but apparently Verizon disagrees. The rumored “XyBoard” name for the Motorola XOOM 2 and its smaller Media Edition seems to be the final name, according to Cnet. Verizon confirmed that two tablets with Droid XyBoard branding will launch before the end of the year, both with LTE radios inside.

The XOOM 2 has already been released in the UK, minus the lamentable Verizon branding. Wifi versions of the tablet weigh in at £325 for the 10-inch version and £299 for the 8.2-inch version, before value added tax. While there’s still no word on US pricing, but a Verizon leak puts them at $429 for the 16GB Media Edition all the way up to $729 for the full-sized 64GB version. The new tablets will have dual-core 1.2Ghz processors and a full gig of RAM each, and both should retain the original XOOM’s 1280 x 800 display.

If you’re particularly attached to the XOOM name, or just repelled by “XyBoard”, there may be hope for a more suitable branded WiFi-only version. the “DROID” monikor is exclusive to Verizon, and it’s unlikely that they’d allow Motorola to sell a “DROID XyBoard” without saddling it with Verizon service. Based on that, we may see a WiFi-only XOOM 2 in the months following Verizon’s release. We can only hope.