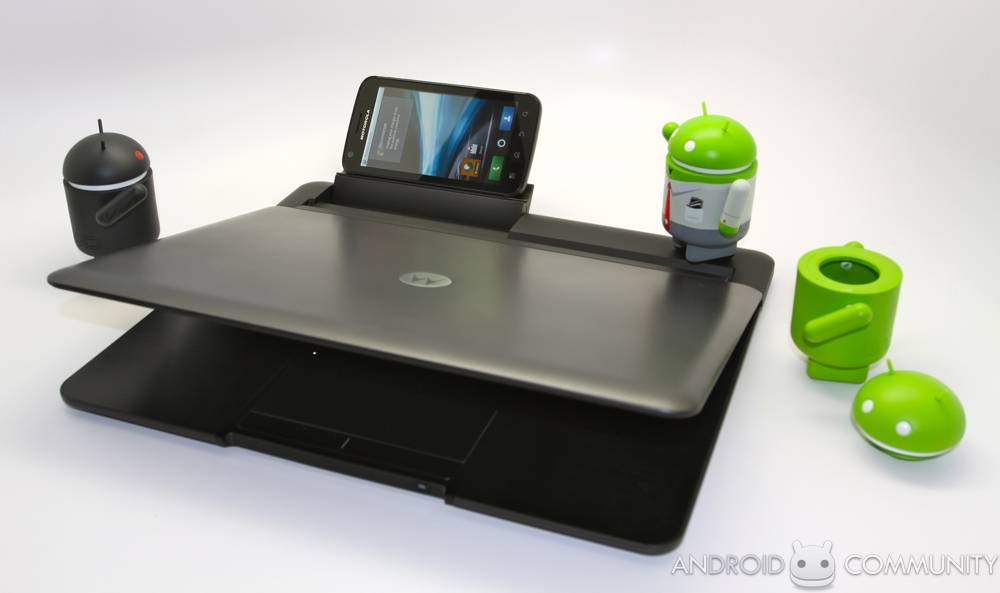 Welcome to the hat trick. This is the phone that won Best Device CES 2011 and is the only one in the world to have three docks out of the gate, one that’s two, for a television and to allow it to connect to the keyboard and a mouse and remote, and another that’s a full fledged laptop. This is a big stepping stone in making smartphones the screens we carry around with us everywhere that also act as our computers we’re going to be able to use for everyday work. Inside there’s a fat NVIDIA dual-core Tegra 2 processor running it’s lovely 4-inch qHD display. Reviewing this phone has been difficult due to the versatility, but we bit the bullet and managed to bring you a solid flat look. NOTE: Don’t worry about the headless Andy, he’s fine, just being modded.

A perfectly sized not-too-large and big enough to enjoy sweet HD quality content display is covered with a pane of mega-strong Gorilla Glass. Behind this is a singular strong patterned piece of hard plastic with breaks only for the fingerprint sensor, speaker, and camera. In the center of this back panel is the AT&T logo with the Motorola M logo near the bottom, while on the front is the type-centric Motorola logo with your big four touch-sensitive buttons along the bottom: menu, home, back, and search.

The phone as a whole is 63.5 x 117.75 x 10.95 mm and 135g heavy, with several plugs along the edges. These plugs include a microUSB and HDMI connectors on the bottom left, volume dongle along the right, 3.5mm headphone port and power button along the top. This power button is also the fingerprint scanner that will allow you to lock your phone based upon your unique finger signature. We’ll tell you right now that this scanner is surprisingly accurate, and if you’re unable to make it function because you got your fingers burned off or if you want to give access to someone else, you’ve also cot the option of entering via passcode. 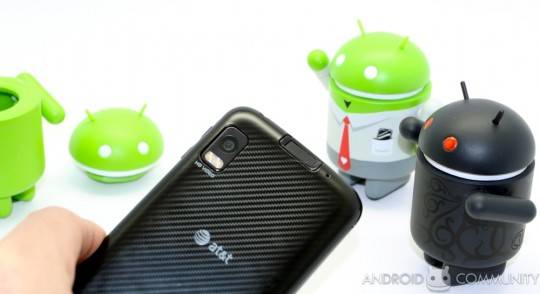 The display is a step up from most of your everyday Android smartphones of the day, at a lovely 4-inch qHD capacitive and 960 x 540 pixel resolution. Calculated down to the pixels per inch, it’s still not quite as sharp as an iPhone 4, but still blasts past the majority of its competitors. On the front above the display is a VGA-resolution webcam, brightness, and proximity sensors, each with the sensitivity and resolution you’ve come to expect from a modern smartphone – not perfect, but definitely much more excellent than any comparable device int he past. 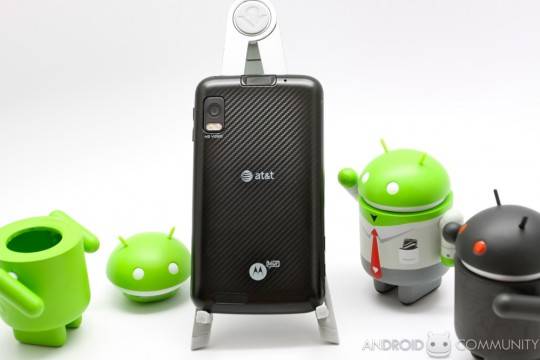 On the back is a not-quite-the-most-powerful 5-megapixel rated camera, but as you’ll see below, it definitely functions well (with its dual-LED flash almost as a bonus.) This camera shoots 720p HD video, so you’re going to want some space – thusly, there is space. Inside you’ll find the NVIDIA Tegra 2 processor with a pair of 1GHz cores and a fat 1GB of DDR2 RAM with 16GB of integrated storage. That’s fat, it’s amazing, it’s more than you’re ever going to need on a normal daily basis. But you can have MORE if you want with the microSD slot that’ll give you an extra 32GB.

This phone connects via AT&T’s HSPA+ “4G” network, quadband GSM/EDGE, Wifi along b/g/n with support for both 5GHz and 2.4GHz bands, plus it’s got Bluetooth 2.1EDR and of course microUSB and HDMI ports. Oh and you want more? How about GPS, accelerometer, and digital compass? Those are in there too. 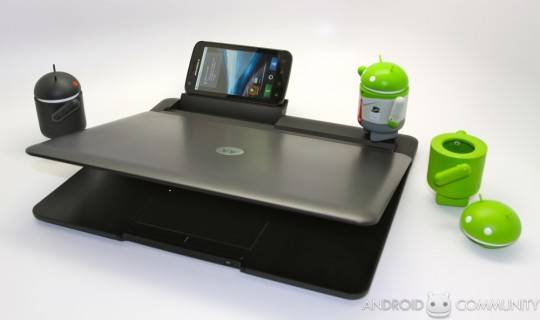 NOTE: Laptop Dock and HD Dock are covered near the end of this review as they should be considered both integral to this phone but also separate should you choose to use it without them.

We begin to get sick to our stomaches when we hear that this phone will be running Android 2.2 Froyo and Motoblur, but quickly become well again and even full of vitality when we find that these things are hardly a stopper on the lovely workings of this otherwise very up-to-date handset. Motoblur, or MOTOBLUR if you prefer, looks ever so slightly nicer than its predecessors – take a look at the post Motoblur Gets an Update if you’d like to see the press release on this brand new version. On the other hand, since we are still hackers and developers at heart, we cry once more when we find that AT&T has continue their limitations on this Android handset, that being the complete stopping of sideloading apps, aka all those apps that you have sitting around that aren’t coming directly from the Android Marketplace.

As for apps that come with the handset, there’s an array of AT&T bits including Navigator, YP Mobile, Code Scanner, and My AT&T as well as a few Motorola deployed offerings which include Quick Office 3.0, Vlingo Voice, Need for Speed, and MobiTV, as well as an app for a company we were sure already went out of business: Blockbuster. Odd. 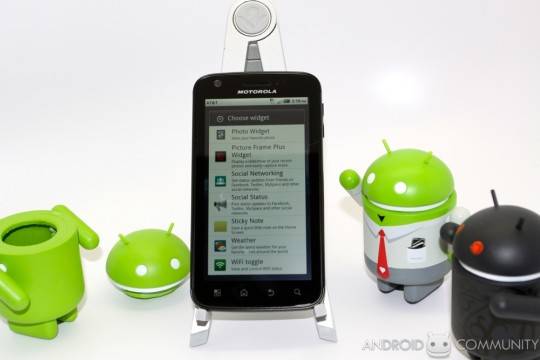 Then there’s a few Google apps, the list getting long now for how many apps we really need included out of the box, but Google giving some we’d have gotten anyway, take for instance Gmail. As is average with most Android phones released in what would otherwise a very open environment, most of these apps are not allowed to be deleted. You know the way around these locks though, right, developers and hackers? Of course you do. No problem. 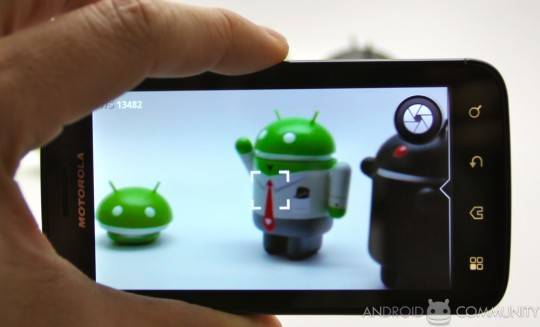 Leaving something to be desired when you consider the power that could be unleashed with the Tegra 2, this handset takes reasonable photos that could definitely be better had a slightly nicer camera been installed. Photos are alright, considering the fact that everyone will know that you used a mid-range smartphone camera to take them, while the video at 720p is fairly nice, with a 1080p unlock coming down the road we’re told. Again, the Tegra 2 is capable of bringing us much more than we’re given here, though if you’re not in it for the capturing and sharing of images and video, no worries.

Not quite getting into the dock situation yet, we’ve got to say that display of media, even the not-quite-perfect media captured with the device, is amongst the nicest we’ve seen. This handset supports AAC, H.264, MP3, MPEG-4, WMA9, eAAC+, AMR NB and AAC+ formats with video playback at up to 30fps, a collection of formats you’ll come to appreciate when you’re running through sets of videos passed on to you from wild sources from across the internet – that is, if you’re that sort of person. 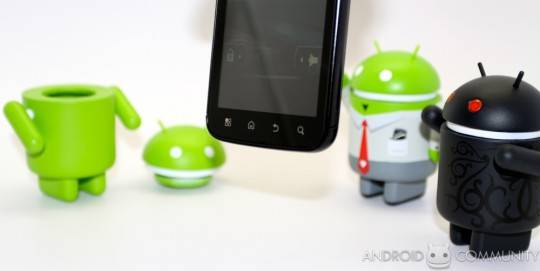 Noise reduction is the key in this situation, as it’s getting quite difficult to increase the power of voice-to-voice calling at this point in our smartphone history. Solid calls to and fron the ATRIX 4G have been made by us, and speakerphone is really loud and nice.

Not so fast! Very similar to the other AT&T phone we’ve got on hand here, the HTC Inspire 4G, we’ve had some ever so slightly slow downloads and especially uploads. We’ve heard from the source that the HTC Inspire 4G has no HSUPA, (aka 3G upload speed,) and thus is working not on 4G, not on 3G, but at even slower speeds for uploads. Take a peek at the speeds on the Inspire and tell us if you think the same thing is going on here with the ATRIX 4G, which is grabbing right around 1.4 Mbps download and .15 Mbps upload. 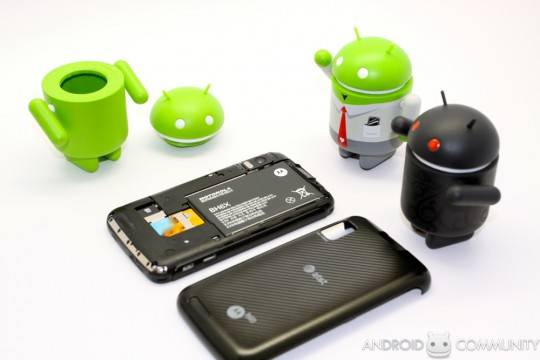 This handset contains a 1,930 mAh battery direct through Motorola, model number BH6H, giving us right around 13 hours of runtime, that’s with use of several apps, internet browsing, music, and video recording and playback. You will certainly be charging this phone every night when you go to bed, possibly when you’re sitting around working as well, depending on how much you sleep and are awake in a day, of course. Planning on using this phone mostly for Twitter? You’ll probably just need an overnight charge daily.

Take a look at our ATRIX 4G Laptop Dock [Review] post to see how it fares against itself and the competition.

Head over to our ATRIX 4G HD Dock [Review] post to see all you’re going to need to know and hear about it.

The Motorola ATRIX 4G costs $199.99 brand new attached to a 2 year AT&T agreement. If you plan on doing it this way, you’ll have to scoop up both data and call plans, plus if you plan on tethering (like a normal person) you’re going to have to get the most expensive data plan at $45 a month. That with the cheapest voice plan makes this an $84.99 a month handset without any docks or anything. The HD dock costs $129.99, the Bluetooth keyboard costs $69.99. If you want the mouse, you’ll have to buy the “Entertainment Center / Webtop Access Kit” which includes both the HD dock and the keyboard as well as the mouse all for $189.99.

The laptop dock is $299.99 after rebates which total $200 (mail-in and instant.) If you want to buy the laptop dock by itself, that is, if you decide to buy it after you’ve already got the phone, you’ll be paying $499.99 alone. Is it worth it to have this futuristic carry-about phone to computer option? Ah… not sure yet. We’re hoping this all-data carryable around with you option continues with other devices, but this one might be too soon.

This is the bigtime innovation phone in many places, but it’s really expensive to offer all of this new options to you as soon as it has. The option to plug your phone into a laptop sort of device is an idea that’s been a longtime coming, and this wont be the last time it’s been implemented. The phone appears to definitely be worth itself on its own with the amount it costs at the moment, but the docks, at least the laptop dock, may have been released too quick. On the other hand, we give props to Motorola for releasing such a dock first. That’s always something worth a high-five over. Buy the phone, wait on the laptop dock, buy the HD dock. Go for it.