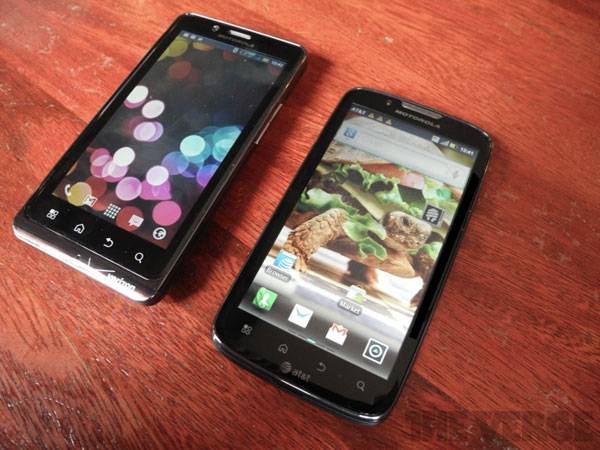 That Motorola Atrix 2 also known as the Edison has been leaked already. We talked about the early leaked shots a few days ago when they surfaced. Today the gang over at This is My Next went hands on with the Atrix 2 and offered up some photos so we can go along for the ride. The gang says that the phone looks good and feels good in the hand.

The phone is destined for AT&T and is packing some features similar to the Droid Bionic. The Atrix 2 is a more rounded phone rather than a square monolith. The Atrix 2 has a 3.5mm jack for headphones, and has two mics with the second presumably for sound cancellation. There is a dedicated camera button on the right edge and the power button. The lock button is said to be flush and easy to press. That camera button is a single stage though, which means you can’t hold halfway to set focus and then snap the shot.

The cam is an 8MP unit that can do 1080p video and has a LED flash. The screen the Atrix 2 uses is a 4.3-inch qHD LCD. A close up view of the screen shows that the Atrix 2 lacks the Pentile pixel arrangement of the Motorola Droid Bionic with the cross-hatching pixels that bother some Bionic users. That will be something that people upgrading to the Atrix 2 will appreciate. The Atrix 2 runs Android 2.3.5 and much of the crapware we expect from AT&T is loaded on the phone, how much will be removable by the user is unknown.