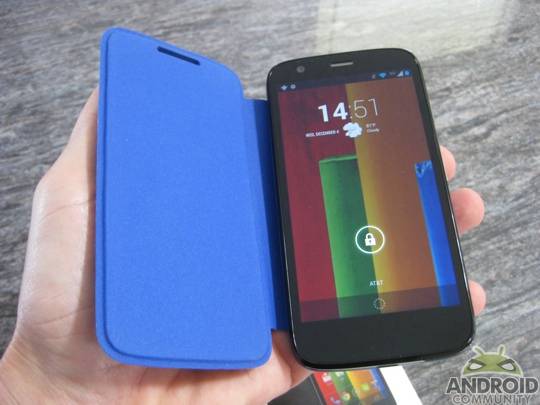 Following a lengthy series of rumors, Motorola officially announced the Moto G at an event back in mid-November. Since that point we have been watching the handset begin arriving. The North American launch began in Canada and that was followed up with an earlier than expected release in the US market. But along with the announcement for the Moto G itself, Motorola also detailed some accessories. With that in mind, we have recently been spending some time with the Moto G and for today, we have a hands-on with the Flip Shell.

First things first though, one of the key features of the Moto G is the colors. Motorola calls these Shells and they are essentially just colored replacement back covers. The Shells are available in a variety of colors and sell for $14.99. The Flip Shell is also available in a variety of colors, however these are priced a bit higher, at $29.99. The Flip Shell offers protection for the front and back of the device, as well as a few little extras. 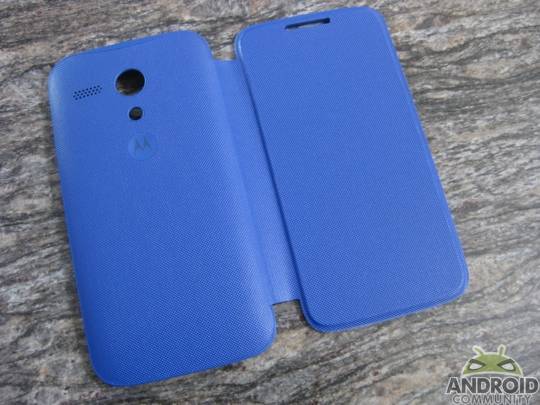 The image sitting above and the gallery below shows the Flip Shell by itself. As you can see here, the back is textured and there are the appropriate openings for the earpiece, headphone jack, USB port, camera, flash and speaker. Of course, given these are official from Motorola, we would be more surprised if they didn’t have the appropriate openings. One key item here, the regular Shell is smooth on the back, almost matte like in finish.

Keeping up with the images, the next gallery shows some with the actual phone in the case. As you can see from the images, no issues with the fit. But again, the Flip Shell is direct from Motorola. Basically, everything on the phone works just the same as it would with the regular Shell. One thing that you cannot see in the images though — the added functionality. Opening the cover will turn on the display. And vice-versa, closing the cover will turn the display off.

The opening and closing to turn the phone on and off — it takes a bit of getting used to. We found that we are still going for the power button to turn the display on and off. Muscle memory, but that will adjust with some added time. Otherwise, the texture on the outside of the Flip Shell is nice and makes the phone a bit easier to keep in your hand. The inside of the flip portion is soft to the touch which seems like it will only further protect the display.

Overall, we have to say we like the Flip Shell option. They should be good for the person that wants complete protection. The only issues that we found came in regards to weight and taking pictures. The Moto G isn’t the lightest phone. In fact, it weighs in at 143 grams (as compared to the 130 grams of the Moto X or Nexus 5) so any added weight is felt. As for taking pictures, while the camera lens is clear on the back, we found the flip cover hanging down to be a bit awkward.