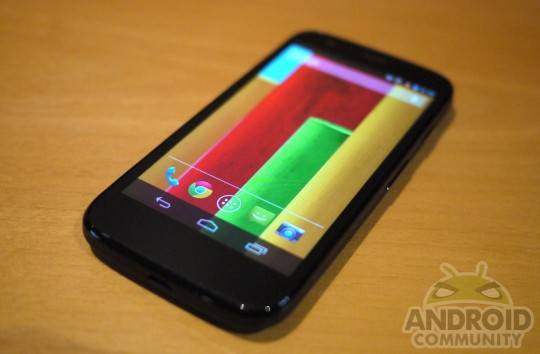 We were expecting the Moto G to arrive with several Canadian carriers and as of today, that has happened. The Moto G has arrived in Canada by way of Telus and Koodo Mobile, both of whom have the handset with the expected low price point. The handset can be picked up for $200 without any long term agreement necessary.

Aside from purchasing the Moto G without any agreement. Telus is offering it for free on a two-year agreement. Koodo Mobile also has an option for those not willing or able to pay the full $200 upfront. In the case of Koodo, users can grab the Moto G for $50 on the sliding payment setup.

Regardless of which carrier you choose, or which payment option you decide works best for you — the handset and the specs will be the same. That is to say you will be getting a black Moto G with 8GB of internal storage space. Other specs include a 4.5-inch (1280 x 720) display and quad-core 1.2GHz Snapdragon 400 processor with 2070 mAh battery and 5 megapixel rear-facing camera.

Motorola is launching the handset with Android 4.3 Jelly Bean, however they have already said Kit Kat is coming. The upgrade is expected to arrive in January and judging from the way we have seen Kit Kat rolling out to the Moto X, we would be surprised if Motorola wasn’t able to keep that promise. Those considering a purchase can also expect to find a 1.3 megapixel front-facing camera as well as 50GB of free (for two-years) Google Drive storage.

Also worth mentioning, while both carriers have the handset only in black, there is the option to pick up another back cover, which Motorola calls the Shells and has available in a variety of colors. That said, Motorola announced the Moto G earlier in the month, and shortly after the announcement, we spent a bit of hands-on time with the new smartphone.