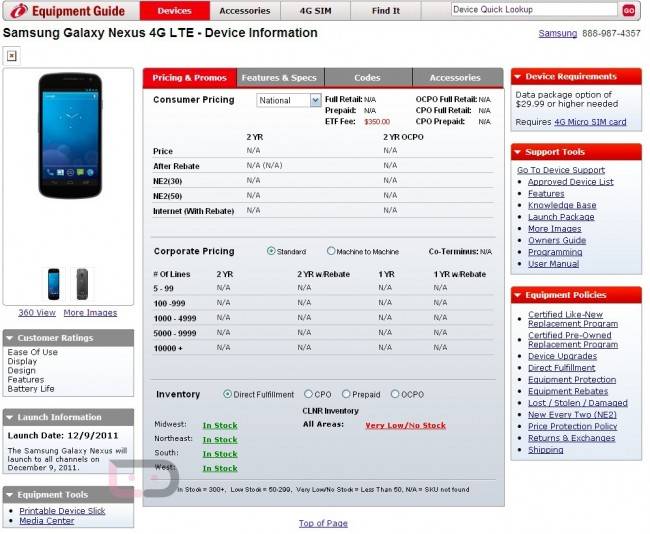 At this point it’s probably safe to circle Friday on your calendar. Droid-Life has yet another look behind the curtain at Verizon, where an Equipment Guide screenshot verifies the December 9th release date for the Galaxy Nexus. This follows an additional leak from Engadget, which shows the Nexus dropping into retail stores on the ninth, preceded by the DROID 4 on the 8th. It’s all over bar the crying, and the enthusiastic emptying of wallets.

The Wall Street Journal confirmed in a separate story that the Samsung Galaxy Nexus would carry a price tag of $299, which isn’t mentioned in either of the stories above. That’s the price we keep hearing, however, except in the case of a Black Friday deal that was never enacted. Units are also starting to arrive at Verizon retail stores and second-party resellers like Best Buy, including a snazzy white-on-red packaging. If it weren’t for the distressing news that Google Wallet won’t be available, it’d be all good news.

The only question that remains is, why isn’t Verizon hyping up the release of the most important Android phone this year? Aside from the blank sign-up page and a brief appearance in NYC, there’s been almost no PR released about the Galaxy Nexus. Will customers who signed up to be alerted via email have to rush out to retail the morning of to get their phones? Is there going to be any sort of pre-order program at all? It sure doesn’t look like it. It almost seems like Verizon wants to keep this phone out of the spotlight, at least for the time being, and that’s a real disservice both to Verizon’s customers and to a device that deserves the public spotlight.