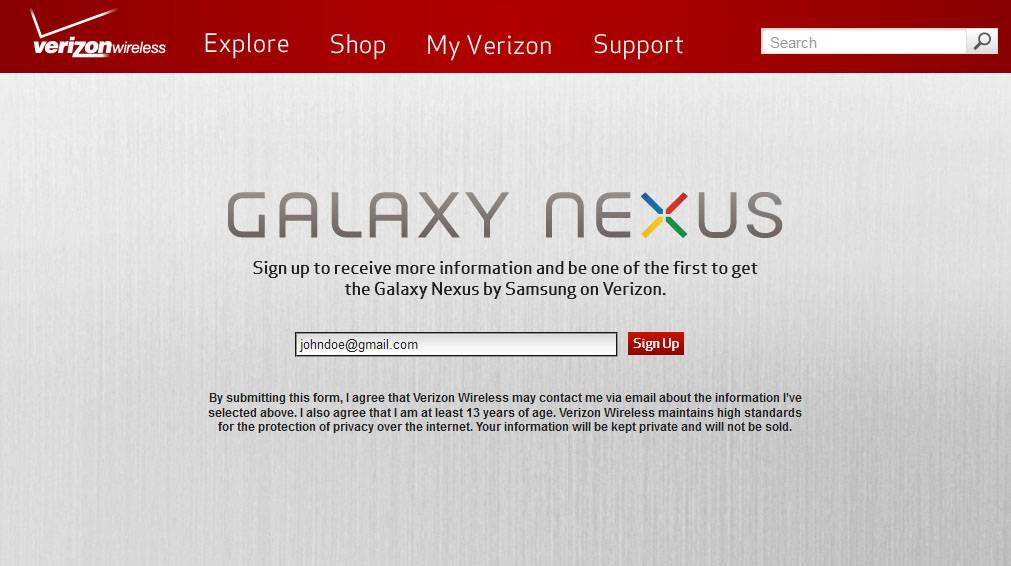 The Galaxy Nexus is almost upon us, and though Verizon has been relatively mum on the subject so far, it looks like that’s about to change. Like the DROID RAZR a few days ago, the Galaxy Nexus sin-up page is now live. You can be among the first to learn all the pressing details about the Samsung phone on Big Red – all it will cost you is your email address. And your name. And your phone number.

Not much has been made of this, but Ice Cream Sandwich and an incredible screen aren’t the only novel things about the Galaxy Nexus. It’s also the first Nexus model to be available on Verizon, a big deal for Android users hungry for that pure Google experience. Early leaks point to a $299 price tag and a possible November 10th release date, the same as has been confirmed for Motorola’s DROID RAZR and rumored for the HTC Rezound.

The Galaxy Nexus will be the first device to run Android 4.0 Ice Cream Sandwich, and an enviable checklist of features like a 4.65-inch 720p Super AMOLED screen, a 1.2GHz dual-core processor and support for Verizon’s 4G LTE network should keep it at the front of the Android pack – at least for a few weeks. Other manufacturers like HTC, Motorola and Asus have committed to bringing Ice Cream Sandwich to their latest phones. One of Ice Cream Sandwich’s most anticipated features is equal support for smartphones and tablets, and the very first ICS tablet will probably be Asus’ Eee Pad Transformer Prime, expected on November 9th.