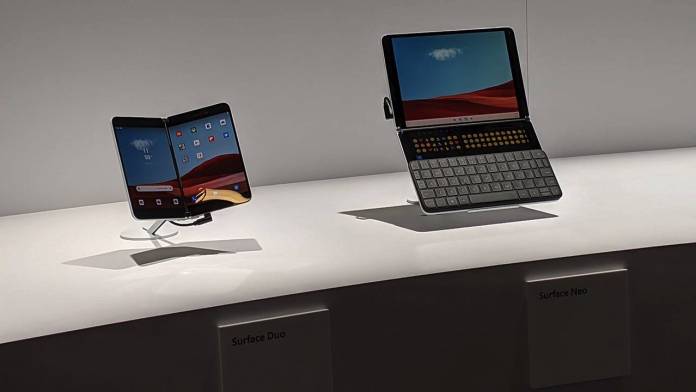 Microsoft has always wanted to enter the touchscreen tablet category. Well, it has with the Microsoft Surface series but it hasn’t really made it big. The market has been saturated by the iPad and the numerous Android tablets available from different OEMs. We’re anticipating the Microsoft Surface Neo and the Microsoft Surface Duo but unfortunately, there could be a delay. The Android OS-powered Surface Duo is still on schedule but the Windows version will be delayed. We have no idea what happened to the foldable tablet that runs Windows, Microsoft’s very own OS.

That is one ironic situation. Microsoft is supposed to have a better hold of the Windows-powered version but it’s delayed already. There is no word on the Android Surface Duo’s exact market release but it’s still on the horizon and on schedule.

We’re not sure if the report that the Microsoft Surface Duo may come earlier than scheduled still holds true but we won’t be surprised if a delay will happen. A lot has happened to the world since then. Companies around the globe have been affected–even Microsoft.

The Microsoft Surface Duo looks more like a foldable phone but it’s really just a tablet running Android 9. It runs on a Qualcomm Snapdragon 855 chipset. It’s not clear if it’s eligible for an Android 10 upgrade.

As for the Microsoft Surface Neo, the device is more of a hybrid-tablet-and-laptop with the keyboard. It’s expected to run Widows 10X which is also not yet ready. We don’t doubt Microsoft can produce the two. It’s only a matter of when we’ll get to see them.