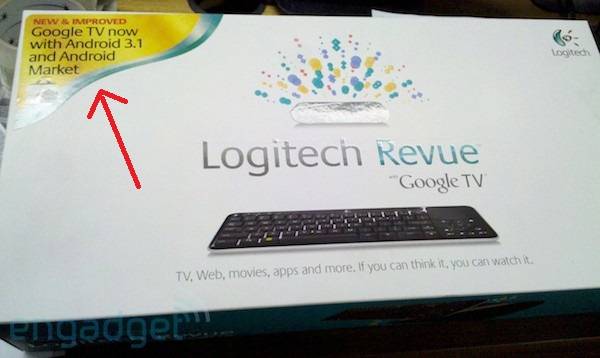 It appears Google might finally be ready with the long delayed Android 3.1 Honeycomb update for the Logitech Revue and other Google TV set-tops. We’ve seen a few Honeycomb leaks lately and after the Revue dropped to $99 many bought it with the hopes to get Honeycomb and Ice Cream Sandwich one day soon. The Logitech Revue is now hitting retail stores again with an updated box. This time right front and center it says Android 3.1 Honeycomb and the Android Market — I guess it’s time I go buy one.

Last month Google started pushing a small OTA update for Google TV that mainly fixed a few bugs and small issues that weren’t a big concern, but that same day @GoogleTV tweeted something big was coming soon. It has been a little over a month since then and hopefully they are finally ready to start pushing Android 3.1 Honeycomb to Google TV, I sure hope so at least.

With the latest updates to the Xbox 360 I’m still wondering what it all means for Google TV. Hopefully along with Android 3.1 Honeycomb Google has some more TV and movie partners as well as a slew of new features to make it a more streamlined and wanted experience to boost sales. Apparently the boxes aren’t on the floor for purchase yet so we don’t know if they’ve been updated to 3.1 or if they are just waiting for the update to start rolling out, then they’ll start selling. Either way we should be hearing more very soon so stay tuned and be sure to start checking for updates on your own Logitech Revue.

Update: After reaching out to Logitech regarding these newest boxes that have been seen this was what they had to say in response:

We’d like to clarify that these products do not include the next version of Google TV software. The boxes were prematurely updated with the stickers in anticipation of the next release of the Google TV software, which, once available, will be a free and automatic update pushed to all Logitech Revue boxes that are installed and connected to the Internet.”

If you have an update waiting for you sometime here soon feel free to let us know by throwing us a TIP.