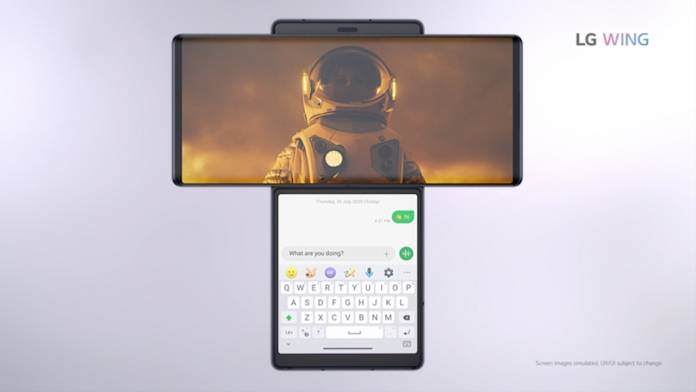 The LG Wing is LG’s first ever Explorer Project device. It is perhaps one of the most innovative smartphones to be introduced in the market this year. We first learned about a concept phone with a T-shaped display as early as May. A few months later, it was shown off as a smartphone with a smaller secondary display. Before it was officially announced, we saw its screen being used for gaming. The two screens were soon confirmed and seen in action.

Just recently, the LG Wing was sighted on Michael Bay’s upcoming movie about a pandemic. The latest we have about the LG Wing is that it’s getting a software update. It’s actually ready over-the-air (OTA).

The update brings new and enhances features including improved screen switching speed when swiveling and a dark wallpaper theme that shows the color of the POLED well. LG also now allows moving the main and secondary screen by swiping the display with three fingers.

LG has tried to get feedback from the fans. The community has not failed to give their suggestions on how to make the LG Wing better. This particular update is a result of those suggestions shared by the LG fandom and online community.

LG has collected information and recommendations from the customers. They are compiled and then discussed by the LG team that is involved in product planning, development, and customer service. The goal is to identify inconveniences and then provide solutions or changes. This effort is also to make after-sales customer support stronger than ever.