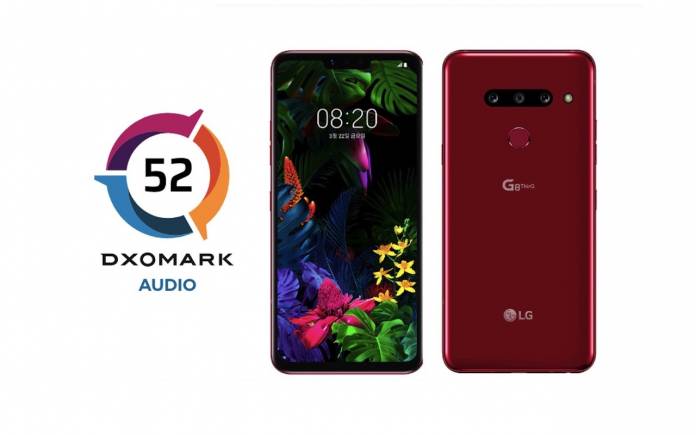 When we feature DxOMark reviews, it is often about mobile photography. The benchmarking website reviews the cameras of some of the latest and more popular smartphones in the market today. It doesn’t just look at premium flagships but also mid-range devices’ photo and video scores. DxOMark has made changes to its processes and in 2017, mobile test protocols were updated to keep up with the advancing imaging technology. Even selfie cameras were considered and then updated and so DxOMark Selfie Overall Score started a new protocol last year.

LG may not be number one right now when it comes to mobile phones but it strives hard to bring the consumers new and innovative features. Recently, it started looking into using ‘Cloud Top’ to make phones into PCs together with Samsung. We’re waiting the LG V60 ThinQ with 5000mAh battery.

Before anticipating for the newer phones, DxOMark reminded us to look into the LG G8 ThinQ not for its cameras but for the audio. Last year in May, the smartphone scored 99 on DxOMark. Back then, it made it to No. 11 in ranking but is now on No. 19, tied with the Google Pixel 2 and the Xiaomi Mi 8.

And then last week, DxOMark shared its findings on how the LG G8 ThinQ’s audio technology made a difference. The device features a Crystal Sound OLED (CSO) that turns the display into a speaker. With this technology, LG promised “making voices easier to discern and subtle musical notes more noticeable”. Simply put, it promised overall clarity and improved volume.

The LG G8 ThinQ may be older but it still makes an impression with the audio features from DTS:X 3D Surround Sound (7.1-channel reproduction) to a boombox speaker, and support for Meridian’s Master Quality Authenticated playback. The phone’s audio specifications also include 32-bit Quad DAC, Meridian Quality Audio (MQA) Decoder, HD Audio Recorder (as an app), Hi-Fi video recorder, and a pair of analog microphones and RAM (Receiver As Mic).

Overall DxOMark Audio score is 52 (52 both Playback and Recording). The Crystal Sound OLED technology offers overall timbre but with a lack of impact, almost absent bass, and several artifacts as described. When it comes to Playback, spatial performance is better compared to other phones. The speakers are not easily occluded by the hand.

Some cons about the audio quality, the LG G8 ThinQ offers a significant lack of bass, below average overall volume performance, and phasing effects from the small exciter. Recording on the phone shows several artifacts generated by an aggressive noise-canceling algorithm, timbre is unnatural, and most use cases show resonances. The audio file volume is also too low.