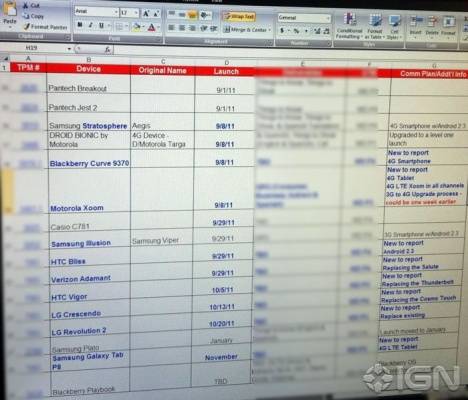 You guys might want to sit down if you’re reading this, or at least go grab a towel. Apparently someone leaked a HUGE list of all the goodies and upcoming products for Verizon and most likely a few heads will be rolling for this one. This includes some serious details such as the HTC Thunderbolt replacement, a new Galaxy Tab, the Samsung Stratosphere, other 2.3 devices and more. We even get the release/launch dates too, awesome!

This would take a while to explain and detail so I’ll just let you guys check it out while you drool for a few minutes over the possibilities and upcoming toys. I’m going to only list the Android stuff as well obviously and we will start with the Samsung Stratosphere we covered this week.

The Samsung Stratosphere according to the document is a 4G LTE Android 2.3 device coming in September, that is possibly the Galaxy S II but we wont jump to conclusions but I want one immediately.

Next is the Droid Bionic and I almost don’t want to even mention it because we have beat this story with a stick for months and months. It is everything we already knew and appears to be coming the same day as the Stratosphere, and that is September 8th.

Then we have the Motorola Xoom listed around the same time-frame getting not only the update to 4G LTE but the document also suggests they will be announcing a new 4G tablet. I don’t think I’d enjoy my update if the same day I leaned something better was coming soon, but that is just me.

Rolling down the list we have the Samsung Illusion (aka the Samsung Viper) and it will be a 3G Android 2.3 device coming a few weeks later on the 29th of September. We don’t know much about that name but will be looking into it shortly.

Also is the HTC Bliss and that is the mid-range girl focuses Android phone we have seen a few times but don’t know much about. Next!

This next bad boy is probably what I’m most excited to see and that is the HTC Vigor. This is showing it as the powerhouse that will replace the HTC Thunderbolt. From what we have seen in the leaked benchmark it will be stupid powerful and totally awesome. A 720p HD display, Qualcomm 1.5 Ghz dual-core processor, 4G LTE and need I say more? That is listed as coming October 5th, but as always these dates can and do change often.

To wrap things up we have an LG Revolution 2 listed that will be taking the crown from the original 4G Revolution. We don’t know much about this phone but it should hopefully be a dual-core device like others we are seeing as of late, especially if it plans to replace the original. There is also talk about a Samsung Galaxy Tab PS coming in November, this could be either a new Galaxy Tab altogether or the 8.9″ variety packing 4G LTE.

There it is ladies and gentleman! As always these dates are most likely going to change or be tweaked as things move forward. Watching devices like the Bionic be delayed time and time again we never truly know what to expect but all these details do get us excited here at Android Community. I want the Stratosphere and the HTC Vigor — like tomorrow, but will have to wait a few more months. I have said enough so feel free to look over the photo above and please tell us what you think or feel in the comment section below.