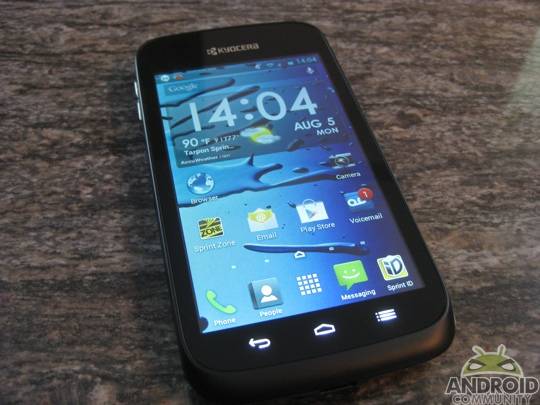 Kyocera began showing a pair of Hydro branded smartphones during CTIA. Those handsets included the Hydro XTRM and the Hydro EDGE and since that time in May, both handsets have come available with carriers. There has also been talk of a third device, the Hydro Elite coming to Verizon Wireless. But how about we put that rumor to the side because today we are taking a look at the Hydro EDGE.

The Hydro EDGE, as the name would imply — is a smartphone that you should feel comfortable having around water. In fact, Kyocera touts the Hydro EDGE as being “water tested, life approved.” More specific, the handset sports an IP57 rating which means it is protected against dust and water immersion in up to 1 meter (3.28 feet) of water for up to 30 minutes time. Before we dive into the water resistance of this particular device, lets first discuss the specs and a bit about the hardware in general.

Up front the Hydro EDGE has a 4.0-inch impact-resistant display with a resolution of 800 x 480. The handset is then powered by a dual-core 1.0GHz Qualcomm Snapdragon MSM8627 processor. That being said, while we suspect some may be turned away by the less than exciting start of the specs, this handset is still able to perform everyday tasks with relative ease. Granted, it is not a powerhouse that is going to scream through the latest high-end games, but it should be more than enough for day-to-day use. 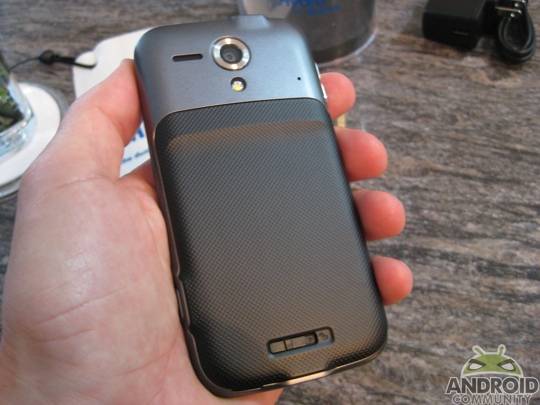 The handset feels thin and light. Actual measurements are 4.90 x 2.50 x 0.39 inches with a weight of 4.5 ounces. Kyocera has the handset slightly thicker on the top as compared to the bottom. As you can see from the above image, there is a slight bump out by the camera. With that in mind, a flat handset is always nice to see, but in this case that slight bump sort of fits where you would hold the phone and as a result, makes things feel slightly better in hand.

Otherwise, keeping with the back of the handset and you will find a textured area over the battery compartment. Speaking of the battery compartment — this has a sliding lock that will keep the backing secure. The Hydro EDGE also has a power button and 3.5mm headphone jack up top, a micro-USB for charging on the bottom, volume rocker on the left and dedicated camera button on the right. The navigation buttons are capacitive and sit from left to right as the Back, Home and Menu. Finally, the backside sports the 5 megapixel camera with flash. 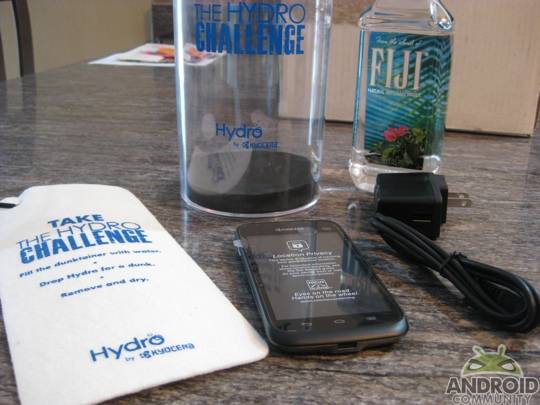 The Hydro EDGE is a mid-level device in terms of specs, however it does have water-resistance as a perk. In fact, Kyocera didn’t even send the handset in a regular retail box. The device we received was sent in a dunk tank. You can get a look at the setup above, and yes, they were even kind enough to send over the Fiji water for dunking (though we used tap). With that in mind, what can one do but dunk the phone. You can get a look at the dunking in the video sitting below.

The in-water and wet usage experience was as we had expected. The handset didn’t have any real issues and managed to keep the water out and keep working after it was removed from the water. Of course, as you will see in the video, using a touchscreen with wet fingers does make things a bit less smooth.

Otherwise, some of the perks of the Hydro EDGE in terms of water have the handset still looking like a regular device. Simply put, this isn’t your typical rugged style device. In fact, aside from the seal inside the battery door and the nice slider lock on the battery cover — the handset looks similar to any regular non-water resistant device. 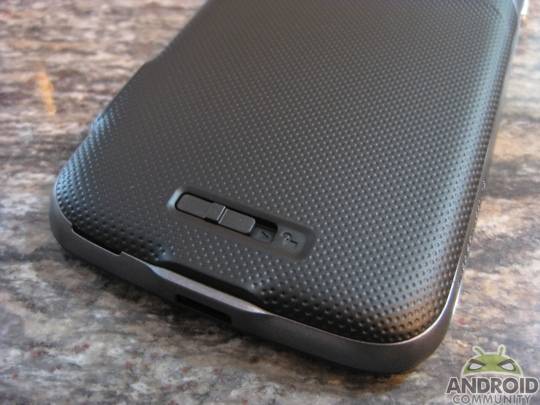 Kyocera has the Hydro EDGE running Android 4.1.2 Jelly Bean. As this is a device that is available with a few carriers (Boost Mobile and Sprint), those making the purchase will find a few branded apps. You know, those most consider bloatware. Thankfully though, in this case they are kept to what we would describe as minimal. They are also useful apps such as account managers. 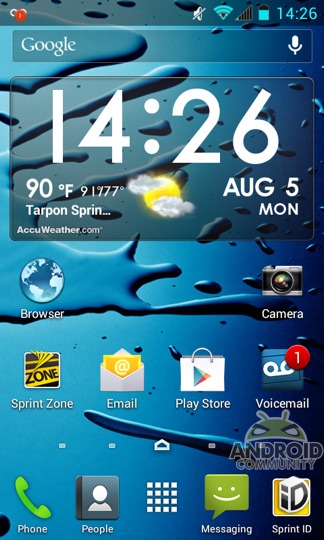 One fault we did find is with apps such as BaconReader and CBS Sports. These two (and a few others) appear in the app drawer and look to have been preinstalled. The fault is they aren’t. A tap of these apps will actually bring you to the Play Store to install them. While we can get past the preloaded carrier branded apps, having apps listed in the app drawer but not actually installed seems over-the-top. 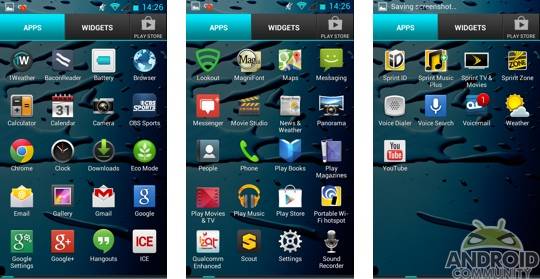 Of course, being Android this handset has access to the Play Store as well as the complete suite of Google branded apps. Kyocera also has a nice touch on the lockscreen that will allow you to quick launch into an app. A tap of the lockscreen will bring a “Flick to Unlock” option with four apps. These apps default as Phone, Messaging, Camera and Unlock but can be customized in the settings.

Bottom line on the software, Kyocera has provided a relatively clean Android experience.

As we often do with device reviews, we ran some benchmarks on the Hydro EDGE. In this case we ran the handset through Quadrant and AnTuTu and while the scores were not all that high, they were what we had been expecting to see given the specs. The handset scored a 4006 with Quadrant and a 9482 with AnTuTu. You can get a look at those results in the image gallery sitting below.

With that in mind, while the scores were not over the top, we still maintain the handset performs well in day-to-day use. By this we mean the handset served us well when it came to handling voice calls, sending texts and emails, streaming audio (using Slacker and Audible) and even for watching the occasional video and playing the occasional game. Simply put, this is a handset for the masses. Well, for those in that group that are also looking for a device that is water-resistant.

When we opened up the battery cover on the Hydro EDGE we must admit we were not all that impressed — the handset has a 1600 mAh battery. By some standards, that is small. In fact, another water-resistant Kyocera handset (the Torque) is sporting a 2500 mAh battery. Anyway, some of this probably goes back to how we used the handset, but battery life was much better than we had hoped.

With lighter usage that involved a few calls, plenty of text messages, some Hangouts chatting and a few hours of Slacker streaming we were able to have the handset sitting with 44 percent with a bit more than 22 hours off the charger. As one would guess, Slacker accounted for majority of the battery drain, but that did involve a few hours worth of music entertainment. 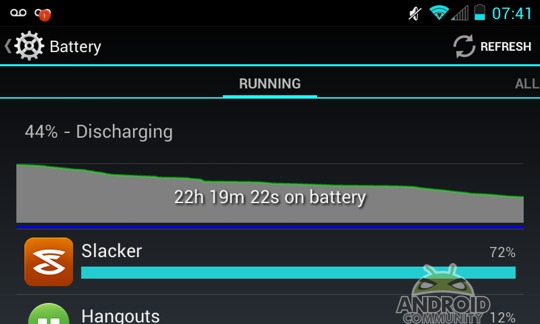 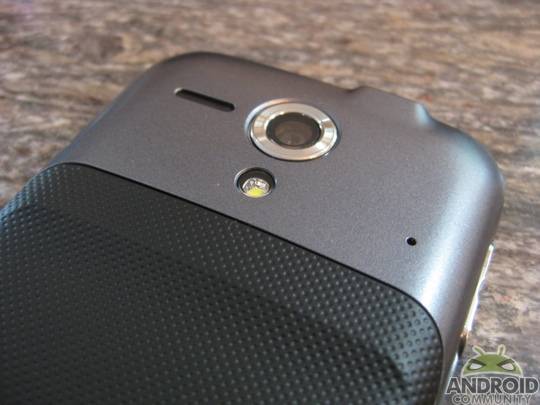 Kyocera has a 5 megapixel camera on the back of the Hydro EDGE. They tout features such as the flash, video recording and other “enhanced” goodies such as “panorama, HDR (High Dynamic Range), facial recognition, smile/blink detection and burst mode settings.” Basically, this means you can capture images at up to 2560 x 1920 and video up to 720p.

We do like how the handset has a dedicated camera button on the side, however overall this proved to be a fairly standard experience in terms of images and video. Sitting below are some sample images taken with the Hydro EDGE. We tried for a mix with some close up, some distance and also in various lights. All said and done, the only real complaint we have in terms of the camera was the speed — from tapping the shutter to taking a picture sometimes took a few seconds.

The other aspect here is the video. Again this records at 720p and was found to be standard. The handset was able to capture video outside and in areas with lots of light fairly nicely, but did suffer indoors and in darker situations. It also takes a bit of time to adjust to different lights. That said, you can get a look at the quality in the video sitting below.

Similar to how we felt about the Kyocera Torque, we like the idea of a water-resistant device. And as we have mentioned before, that style fits in well for those who are often outside. Well, also for those who find themselves dropping their handset in that place where people pretend to not use their phone. We will not discuss that group, but for those who are more active and outdoorsy, the Hydro EDGE could be a good option to consider.

The handset performs reasonably well for day-to-day tasks, it is available with a few carriers (both on- and off-contract) and is rather petit in size. The display is 4-inches and the handset measures in at 4.90 x 2.50 x 0.39 inches. Or in other words, this handset should be small enough to fit comfortably in most pockets and will take up little room in a backpack or pouch on a bicycle.

That all being said, make sure to check out that final gallery of images sitting below.