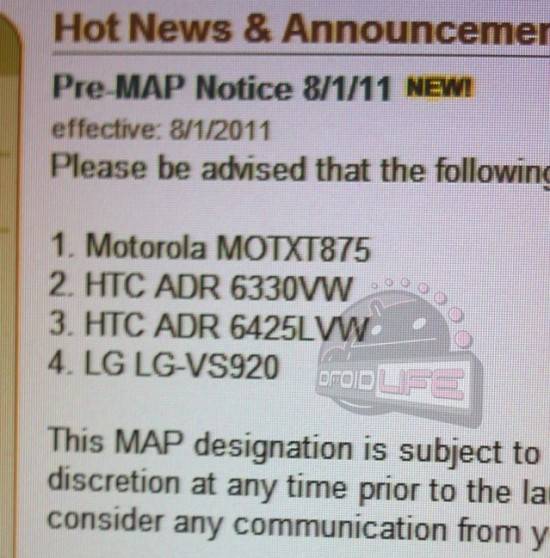 When we heard the Motorola Droid Bionic was delayed until September we all were sad to hear summer would be a little slow in August from Verizon but this latest roadmap shows us a few things to get excited about. This new map shows a few devices listed with the Droid Bionic right at the top of the list.

Verizon users might be getting jealous with the Sensation 4G and EVO 3D landing on all these other carriers but don’t worry as Verizon has a few devices up their sleeves. I wont mention more on the Bionic as we all know plenty about it. Next up we have the ADR6330 on the list. We don’t know much about that but given the product numbers this looks to be some sort of update or upgrade for the HTC Incredible line, maybe an Incredible HD or LTE.

The third on the list is what I’m most excited about, the ADR6425 as that is what we recently learned is the HTC Vigor. A benchmark of the Vigor leaked last week showing some mighty impressive specs like a 720p HD High-res screen, a 1.5 Ghz dual-core CPU and more so its safe to say that will be a powerhouse if the specs come true.

Last but not least we have the LG VS920 and most likely this will be the bigger brother to the LG Revolution as it was codenamed the VS910. So either the VS920 is a new device or a revised and upgraded model. It already cleared Bluetooth certifications and it also has 4G LTE on board. I’m going with the Revolution 2 or it will be something new altogether.

So what device are you wanting, and will you wait for the Bionic? Now that we are seeing the Bionic delayed again and leaks are suggesting the amazing HTC Vigor maybe we should just hold out for it instead. That or the Samsung Galaxy S II when it finally hits Verizon. What phone would you choose?