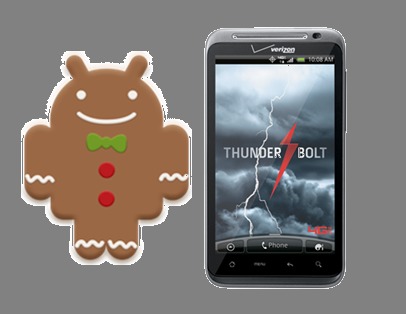 While we have seen a few updates for the Thunderbolt users are still patiently waiting for Android 2.3 Gingerbread to hit the Verizon 4G LTE device. We have been hearing about the update for a while but it appears they are still saying it is on track for Q3 2011, so within the next few months.

We originally heard the update would be coming Q2 but they missed that deadline and didn’t give much else regarding when to expect it, but now it appears a few of the PR reps are now again saying it will be coming “sometime in Q3”, but we still don’t know for sure and since we are in Q3 right now what does this mean? Its coming in the next few weeks, or maybe not for another 2 months. We will have to wait and see, again.

While we are chatting about the HTC Thunderbolt here is our hands-on and unbox video. Our man Chris Burns loves the Thunderbolt and has used it extensively over the past few months since it was launched. If you want to see his thoughts and opinion after using it for 3 months here is that post.

Gingerbread for the Thunderbolt was originally leaked back in May and had a few issues, but with devices like the EVO 4G and others already running Android 2.3 Gingerbread I guess we are just all wondering why the Thunderbolt is taking so long. This isn’t anything official but at least we now know its still in line to hit the streets this quarter.