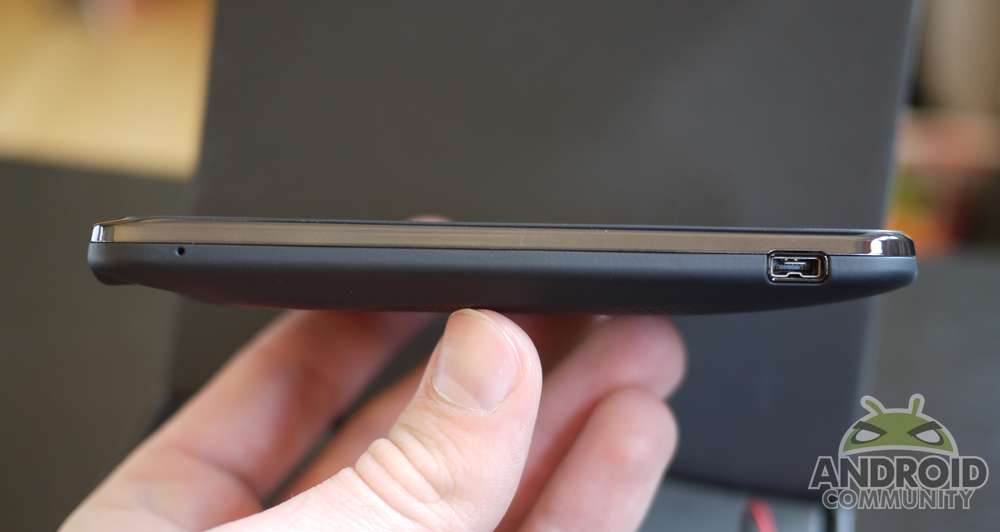 The HTC Rezound is not the nicest HTC device to have been released thus far to the market here in the USA, but it certainly does have all the features that make it one of the best smartphones on Verizon, and certainly one of the top two LTE devices today. In the following review I’m going to prove to you why if you’re in the market for an HTC LTE device, this is your very best choice, that if you’re in the market for the best HTC device on the market, you’d better go with the Sensation, and finally why if you want the most iconic, memorable, and well supported devices on Verizon you may well be better off going with the DROID RAZR.

Before we continue, note that we’ve got reviews of each of the devices mentioned above that you ought to take a peek at since they’ll be mentioned below again. First there’s the HTC Thunderbolt, aka the only other HTC device on Verizon’s LTE network. Next there’s the HTC Sensation 4G, the HTC smartphone your humble narrator still calls the most perfect total package in an HTC device to date. Finally there’s the DROID RAZR by Motorola, the Verizon LTE device that I’m voting as the top choice for an Android smartphone running on Verizon’s LTE network today. What we’re about to look at, again, is a device which you can find first in our HTC Rezound hands-on. You can also find a hands-on video review of the device in the text review here. 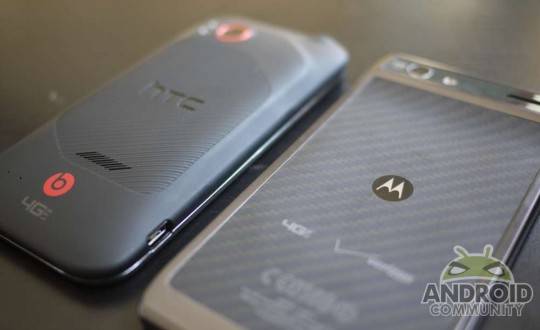 What you’ve got here is one of the thickest smartphones on the market at 13.65mm, with the other dimensions at 129mm tall and 65.5mm wide. Inside this rectangle you’ll find a 4.3-inch 720 x 1280 pixel resolution S-LCD display, one that’s certainly up for battle against the highest resolution smartphones on the market if you just consider the pixels per inch. While the iPhone 4S has 329.65 PPI, the Rezound has 341.54 PPI. The Rezound’s main contender, the DROID RAZR, has 256 PPI but does have a Super AMOLED display meaning you’ve got an obvious difference in the device’s capacity for brightness, as shown here, noting the Rezound is on the left and the RAZR is on the right:

The Rezound has the superior pixel density, but the brightness and the inability of your average everyday user to see the difference between the pixel differences without holding both next to one another make the RAZR have the upper hand here. Also see how the display is a visible amount closer to the glass than the Rezound is, this making the whole situation seem more up close and personal. There it something to be said for how wide both devices are, noting here that the Rezound will be able to fit in more normal-sized palms better than the above-average wide chassis on the RAZR. 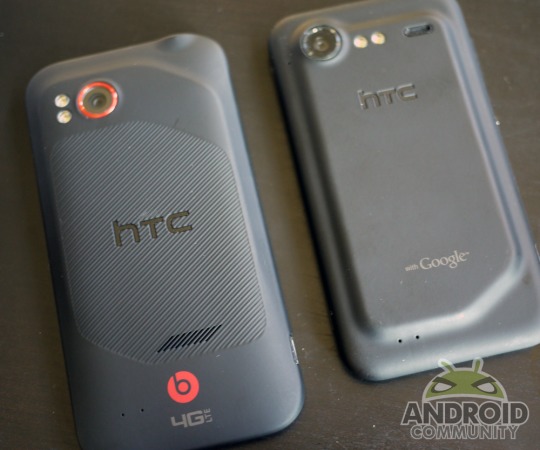 That brings us to the appearance of the device – as the Rezound looks to be continuing where the Incredible 2 left off, we’ve got a phone that both does not stick out in a crowd but feels rather solid. The red ring around the camera lens on the back, the red capacitive buttons on the front and the read speaker face above the display all make one feel like they’ve got something special, and the Beats “b” logo on the back seal the deal, but you won’t get the “oohs” and “ahhs” you would with the RAZR or the HTC Sensation. If you take the time to hold both the HTC Sensation and the Rezound in your hands, you’ll like the Sensation better – I certainly do. The trade-off here is in the audio quality (no Beats!), the slightly less impressive processor (not by a whole lot), and the lack of LTE (Sensation is T-Mobile), but the chassis are as close to perfect HTC has ever gotten on the Sensation, it feels so sweet. 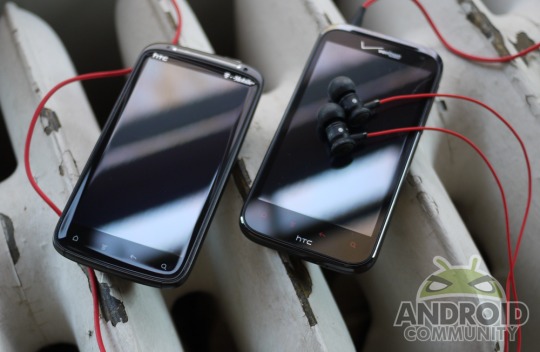 That said, if you’re upgrading from anything less than a 720p display from any other HTC device, you’ll be utterly pumped by the upgrade to the Rezound. The same goes for a person upgrading from a lower-grade display on any smartphone, even more so coming from a feature phone, and if you’ve had just a single-core processor before you’ll basically have a heart attack over how slick, quick, and powerful this device is. It’s only against other top-tier devices that this smartphone has any competition.

The Rezound’s main value lies in its Beats branding, and it’s no joke. While HTC is scant on details on how precisely Beats is integrated here, we do know that there’s an algorithm written into the software, that HTC worked with the Monster Audio folks on the hardware to optimize the experience for Beats in and over-ear audio phones. You get a pair of iBeats in-ear earbuds with the Rezound but it’s with any piece of Beats audio technology that you’ll get a great combination for lovely audio. 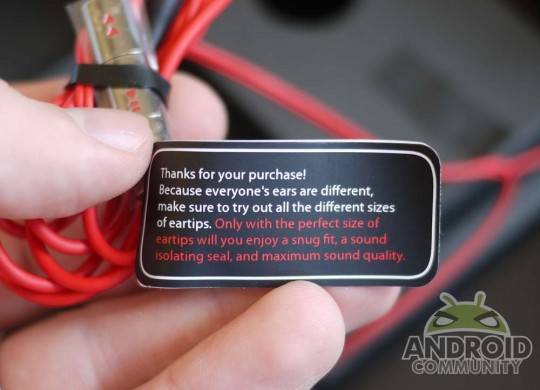 I’ve personally done some very basic listening tests with combinations of earbuds and devices and have found that, believe it or not, the HTC Rezound with the iBeats earbuds it comes packaged with sounds the most amazing together. I tried a couple other earbuds in other devices and here in the Rezound and found that first of all, the iBeats earbuds bring a slightly more full sound with any smartphone than earbuds from other groups which shall not be named but are price competitors. The Rezound on its own doesn’t present a gigantic improvement in audio quality from any other current smartphone competitor with 3rd party earbuds, but when you plug the iBeats in to the HTC Rezound, you know that these two belong with one another. Listening to the song “Kush” by Dr Dre, a song which we’d certainly would hope would sound amazing on his own line of audio products, certainly does: boom, booboom chik, boom boom chik, if you know what I mean.

There aren’t a whole lot of surprises here as far as software compared to the rest of the HTC family as of late as they’ve not changed things around significantly in the past few months on any device. Here you’ve got Sense 3.5, which is the newest, but look at any HTC top-tier device from the past four months in our reviews here and you’ll find the same experience. The HTC Vivid is almost identical, for example. Have a peek at the hands-on video below to see the software in action and a rundown of what’s included in the onboard applications and version numbers. 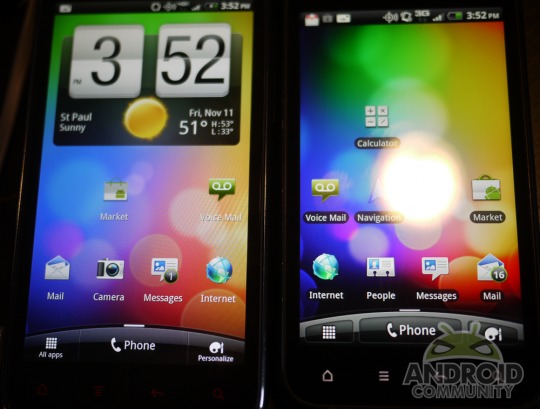 Above you’re seeing the Rezound again next to the Incredible 2 – note how similar the UI is, with ever so slight bits of difference. Also have a peek here at a couple of benchmark tests for all your joyful number munching desires. You’ll find at the end of the review that we’re asking you if you’d like any other tests done, mind you, so if you’ve got your own benchmark you’d like us to run, let us know! 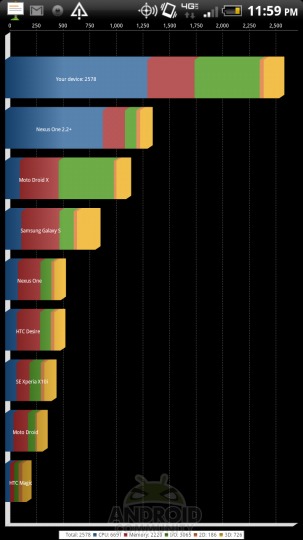 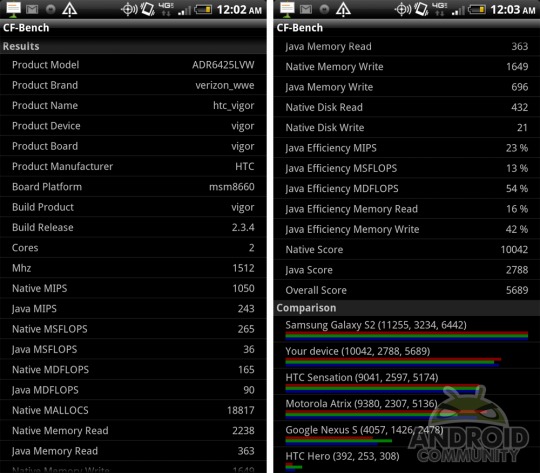 Hands-on with the HTC Rezound

Here we go through essentially everything there is to go through on the HTC Rezound in one video. Still coming up: comparison videos to the devices we’ve not yet mentioned – got one you want compared to the Rezound? Ask in the comments section below, we’ve likely got one right over here on the desk!

HTC continues to improve upon (or at least change) their camera interface with each new smartphone, and here we’ve got a perfectly capable 8 megapixel shooter with 1080p video with a complete set of funny effects and lovely looking filters. One of the more interesting additions here is a slow motion mode for video – audio not included, but it’s fun anyway. Have a peek at a few examples here and in the final gallery below as well, starting here with the 1080p video demo, the slow-motion video, and a couple of photos.

Again there are so many different ways to take a photo on this device that you’re likely to have a heart attack, but it’s an excellent shooter without any modifications when it comes down to it. Note the detail in the screen window here and the vibrancy in the bananas below. Then there’s a flash photo of a toaster taken in a nearly complete-dark situation – those dual LEDs take you to a bright place. 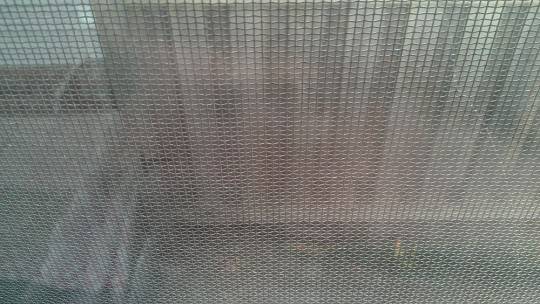 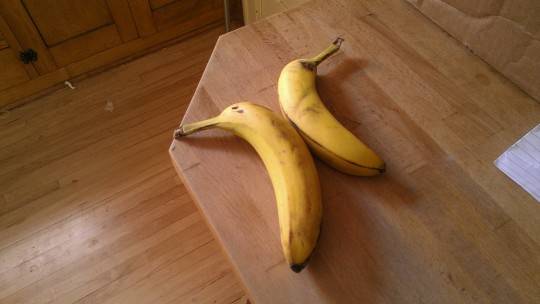 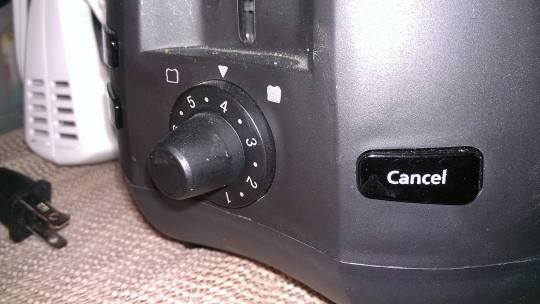 One of the tests I keep getting requests for is one of the battery of any device tested while the device is connected via its mobile data connection and playing streaming video. What you’re seeing in the results here is a test over a span of a few hours: 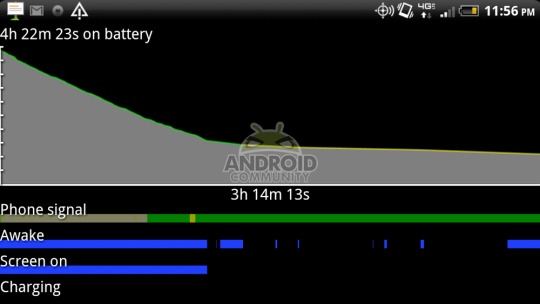 What you can see there is Netflix playing some videos using LTE only. What’s appeared is certainly a decent amount of play-time, enough to watch a movie or two at least, and an OK standby rate of battery pull as well. Without playing non-stop LTE-based streaming video the battery here has lasted more like 10 hours with a small amount of usage of the phone during the day. It appears that this isn’t the same battery destruction machine that the HTC ThunderBolt was at first, but it’s not just a whole heck of a lot better. We’re still going to go ahead and blame bad LTE handling.

If you’re not waiting for the Galaxy Nexus, need LTE speed on a smartphone, and have a strong hate for Motorola devices, buy this handset. This phone is released at a time when a vast amount of people are getting ready to switch up for their next Google hero phone in the Galaxy Nexus, so it’s not realistic to speak of another just-released device as one that’s not going to be in direct competition with said device, especially when its on the same mobile network. Remember the Beats and remain strong! 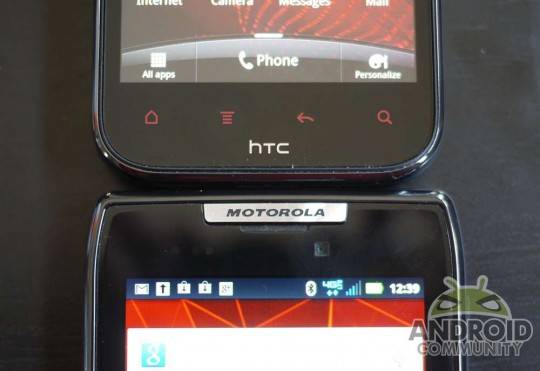 The fact that this device is not in reality sleek or unique enough to warrant calling it a hero device for HTC or Verizon shows a greater understanding by all parties involved in the power of branding. The DROID RAZR has two majorly recognizable names right there in its title, while the HTC Rezound, without even looking at the device, appears to be the next in a never-ending line of HTC devices. They’ve latched on with Beats though, and in that the Beats “b” logo is second only to the HTC logo itself on the device, we know that HTC is positioning themselves as a more brand-power group as well. 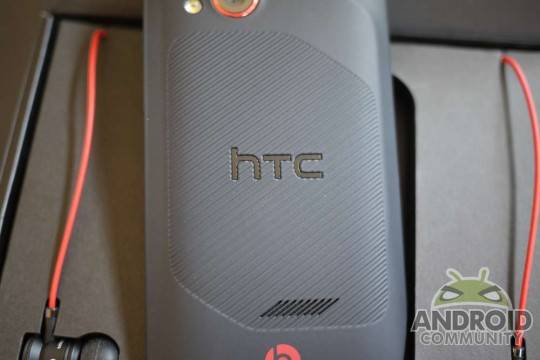 When faced with the decision between the DROID RAZR and the HTC Rezound, you’ve got to think of what I always ask anyone asking me for advice on a new device: what do you need it for? If you want an iconic device whose usefulness as a status symbol almost outweighs its otherwise still impressive specifications set, go with the DROID RAZR. If you want and HTC device and want the most superior audio quality on a smartphone your humble narrator’s own ears have ever heard, go with the HTC Rezound.

Note now that though this is the end of the Rezound review, this is not the end of the review process. If you’ve got any other questions about this device or would like us to expand in any way, let us know!