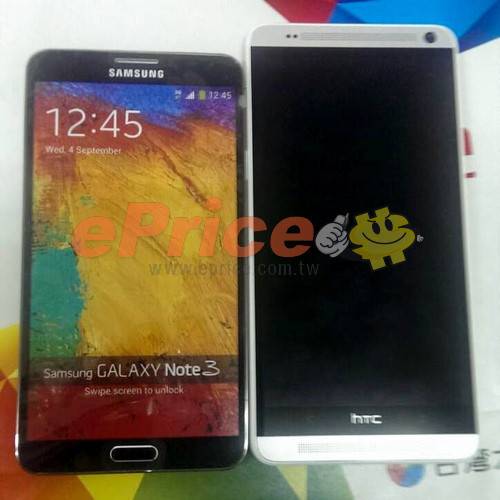 No stranger to leaks and rumors, it appears as if we are getting another pre-announcement look at the HTC One Max. This time around the images have surfaced on the Chinese language ePrice and are offering a look at the handset sitting side-by-side with the Galaxy Note 3. And in addition, there are also a few shots of the backside of the One Max, both with and without the back cover.

First up this time around is the image sitting above, the Galaxy Note 3 and HTC One Max. Previous rumors have suggested the One Max would be sporting a 5.9-inch 1080p display. Regardless though, what we get from this image is an idea of the size of the handset. We know the Galaxy Note 3 has a 5.7-inch display and measures in at 5.95 (tall) by 3.12-inches (wide).

Earlier spec related leaks for the One Max have also brought details of a Snapdragon S4 Pro processor with 2GB of RAM, a 3300 mAh battery, 2.1 megapixel front-facing camera and UltraPixel camera on the back. In terms of storage we have heard details touching on both 16GB and 32GB of storage. This latest leak suggests the handset will have 16GB of storage along with a microSD card slot that would support an additional 64GB.

There has been plenty of speculation surrounding that square black box sitting below the camera lens. That is believed to be a fingerprint reader, however we have yet to see much in terms of functionality. That said, the latest in the rumor mill points towards a mid-October announcement so assuming that time estimate holds — we should be getting those details sooner rather than later.

Otherwise, aside from seeing the One Max make some appearances with the Chinese Tenaa, US FCC and Taiwan’s NCC, there was also a recent mention of the handset from Luke Wood of Beats Audio. Wood, in speaking with Stuff, mentioned that HTC had a “large-format” device coming in the fall that would have Beats Audio.