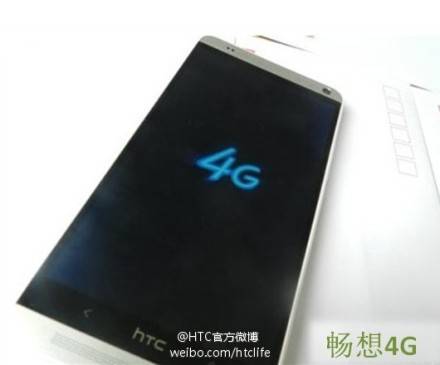 HTC is expected to announce the One Max smartphone at an event later this month, and in the meantime, it appears as if the rumors and leaks are going to increase in frequency until that time arrives. Yesterday we saw a bit from Luke Wood of Beats Audio about how a “large-format” device would be announced by HTC in the fall and arrive with Beats branding. Well, as of today it looks like we are getting another look at that device.

This latest image has been spotted on the official Weibo account for HTC China and while it offers a fairly decent look, it did not offer much in the way or specs or details. There was a reference to 4G showing on the display, of course, that is not telling us something that we were not already expecting to see. In short, it looks like HTC China has shared a picture of the One Max.

Otherwise, a handset believed to be the One Max was spotted in a US-based FCC filing with a model number of T6UL and the handset was also recently certified for use in China. That Chinese bit came by way of the Tenaa and not only included some talk of specs, but also offered a look at the handset from all sides. And yes, that look included the fingerprint scanner on the backside.

More recently, we have also seen the One Max gain approval for use in Taiwan. The details here are coming by way of Focus Taiwan who note the handset has been approved by Taiwan’s National Communications Commission. So far we have heard potential announcement dates of October 15th and October 17th. Finally, those still rumored specs include a 5.9-inch Full HD display and Snapdragon S4 Pro processor along with 2GB of RAM, 3300 mAh battery, 2.1 megapixel front-facing camera and UtraPixel camera on the back.