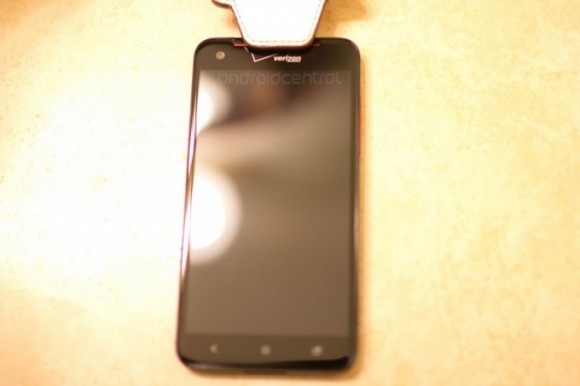 If you’ve been watching the news lately and hoping to see more of HTC’s recently announced 5-inch 1080p smartphone powerhouse you’ll want to stay tuned. This weekend the HTC 5-inch phablet reportedly leaked into the wild complete with Verizon branding and 4G LTE logos. Lets take a quick look below.

Now we know many of you were hoping this 5-inch smartphone would arrive for another carrier and not Verizon, and chances are it still could hit other carriers here in the US. Personally, we were hoping for an HTC Nexus 5 — which could potentially still be a possibility. The term HTC “DLX” or dlx has been floating around for a few weeks, and we might finally be seeing it in the flesh today.

The folks from Android Central supposedly have some leaked pictures showing off the HTC J Butterfly for Verizon as the HTC DLX — pronounced Deluxe — but that could still be lowercase and stand for DROID Incredible X. The device pictured looks almost exactly the same as the Butterfly in Taiwan other than a few tweaks, and the odd square by the camera and a few changes to the rear have the images in question. Whether the photos are real or not isn’t known, but it’s pretty safe to say the DLX or Incredible X is indeed coming soon to Verizon.

The specs have leaked out a few times and almost mirror the device announced by HTC late last week. That being a 5-inch 1920 x 1080p full HD SLCD 3 display. Android 4.1 Jelly Bean, Qualcomm’s 1.5 GHz S4 Pro quad-core processor, 2GB of RAM, and an 8 or 13 megapixel camera on the rear. The important thing here is according to the leak Verizon’s model will have a 2,500 mAh battery. We still aren’t sure on micro-SD support or not, but hopefully HTC will reveal the details soon. Rumors are still slating this for a mid November release date. Who’s interested?