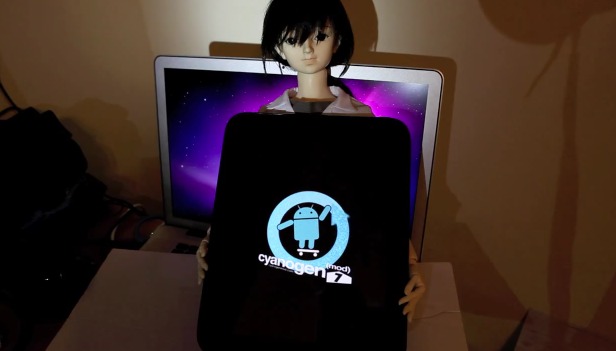 If you thought you’d never see CyanogenMod 7 working on that $99 TouchPad you picked up a few weeks ago, you’ve clearly got no faith in the awesomeness of others. Last we heard, the TouchPad had been given multitouch support for an Android port, but now we know the CyanogenMod 7 build to be a few steps ahead, nearly ready for a full release! All they’ve got left to get working, apparently, is Wi-fi support and a few other tinier bugs. Sound like the system for you?

Certainly John Sheible isn’t looking back at his multi-pad purchase with regret as CyanogenMod 7 makes this tablet a fully functional and fully awesome Android tablet to behold! Touchscreen support is working, accelerometer is working, and all graphics drivers are ready to roll. And if you’re feeling adventurous, you can get internet over a USB cable like the rest of the weirdos using alternate means for internet. You’ll be working hard on your unique 1.2GHz Qualcomm Snapdragon dual-core processor, appearing to work faster here than it ever did in review units before Android was planted.

Also note that with this release comes dual-boot to both Android and webOS, this meaning of course that you wont have to uninstall this tablet’s original operating system to get the newly minted CyanogenMod 7 build working inside. As for the touchscreen issues, which appear to be at the forefront of development woes here on the device as far as Android goes, the CyanogenMod developer in the video does not reveal the driver that was used to make this build work, but does note that it was originally, of course, another CyanogenMod build that made it happen.

Stay tuned as we ramp up to a final build.