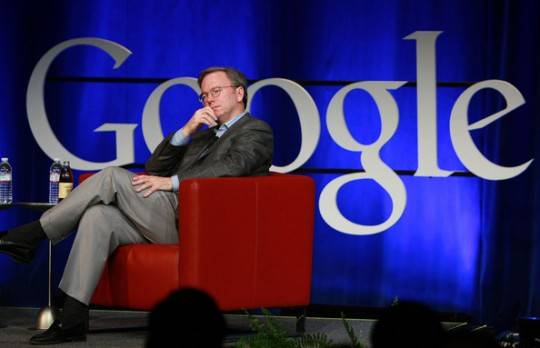 The big guys from Google have been in the news quite a bit over the past few days. After a Larry Page interview earlier this week where he briefly mentioned Apple and the competition, to the once-CEO and current Chairman Eric Schmidt making comments on the lawsuits. Well Schmidt is in the news again today and this time he’s being a bit more vocal.

If Apple’s own evangelist Guy Kawasaki’s comments yesterday were any indication, Google’s clearing winning the “war” on smartphones and technology against Apple. Stating he’s been using nothing but Android for well over a year now, and won’t be switching. Today Google’s Schmidt is making similar comments, but being more forward than Larry Page was during his interview.

In an hour long interview with Bloomberg Schmidt had quite a bit to say regarding their fellow rivals at Apple. He went as far as to say Android’s taking over Apple’s lead at a similar rate that Microsoft did in the PC landscape during the 90’s. A pretty bold statement right there. He had numbers too. Just as we reported, Google’s Android sales doubled from Q3 2011 to Q3 2012 giving them a strong hold on more than 72% of the market share while Apple had just 14%. So this is where his “we’re clearly winning” statement stems from.

The interview linked to above with Bloomberg is a rather interesting one. Eric Schmidt then goes on to talk about Android being part of the “bigger pie”, the government and the fiscal cliff, taxes that Google pushes off shores to avoid extra fees and much more. It’s certainly worth reading to see what Google’s Chairman has to say. Stay classy Schmidt!