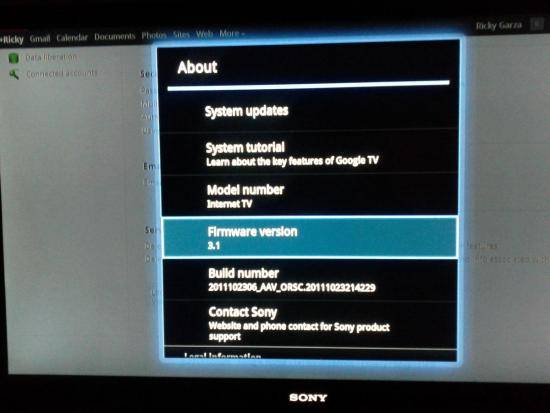 We have seen plenty of the new and improved Google TV (Android 3.1 Honeycomb) in the news lately and users have been patiently awaiting this update. Today it appears Sony Google TV hardware has finally started to receive the over the air update to Google TV 2.0 just like we expected. Get ready for some Honeycomb GTV users.

Last week Google announced devices would start to see the updates at some point this week, but bright and early this Monday morning Sony device are already enjoying the update. Sadly those with a Logitech Revue will have to wait a few more weeks. You should be able to manually check for updates just like usual and hopefully pull down the new GTV 2.0 and give it a try, otherwise it should hit your Sony devices shortly.

We’ve already seen plenty of Google TV apps in the Android Market and the list just keeps growing. We recently spotted Logitech Revue boxes claiming Android 3.1 and the Android Market, but they were later confirmed to just be stickers placed on boxes that will start rolling out once the Revue has received the latest OTA update. Once the Sony updates are completed (and if all goes well) Logitech users can expect to see the same update here very shortly, hopefully by the end of next week.