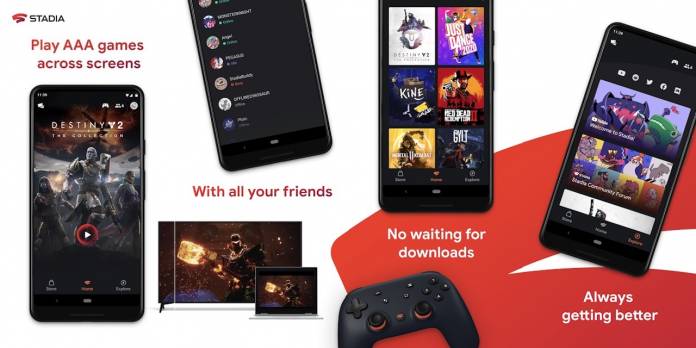 Earlier this year, Google launched the Stadia as a new cheat-proof cloud-based video game platform. It was talked about more during the E3 2019 conference. The Stadia controller went up for pre-order on the Google Store a few weeks after that and we quickly learned it would support the Pixel 3 phone series and multiplayer gaming. The Google Stadia list of confirmed launch games was presented. It was also learned the gaming platform may come to Android TV next year via Android 11.

The Google and Android community has been anticipating for this program because it is cloud gaming. It brings a certain level of excitement that you don’t to buy an expensive gaming console just to enjoy your favorite games. All you need is a smartphone, a display, a Chromecast, and the Stadia controller.

Of course, you also need a compatible mobile App. The Stadia app is now available for download from the Google Play Store. The minimum requirement of Android is Android 6.0 Marshmallow. For iOS, it’s iOS 11. The app doesn’t appear to be ready on the App Store.

Google Stadia system streams mobile games from a smartphone to a TV via Chromecast. Get the Stadia app and then register for an account. You have to start getting or purchasing the games you like to play soon.

The Stadia app lets you play any game across screens you own. Play on TV, your PC, or on a laptop. Other Chrome-OS devices can also run Stadia games include the Pixel Stale, HP Chromebook X2, and the Acer Chromebook Tab 10. With your Pixel 2, Pixel 3, Pixel 3a, and Pixel 4, you can experience Stadia.

You have to get the Stadia Founder’s Edition or Stadia Premiere Edition for access. You can play with one click and experience smooth and low-latency gameplay. Download Stadia from the Google Play Store.