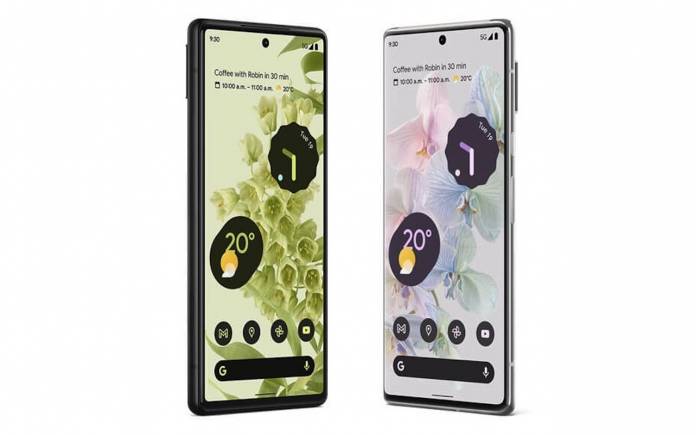 New images of the upcoming Pixel 6 series are out. Prolific leakster Evan Blass has shared images of the Pixel 6 in Seafoam Green and Stormy Black and the Pixel 6 Pro Cloudy White. No, we won’t just focus on the colors but on the camera bump. It appears the camera module will really be how it’s being described. It will be rectangular or more like an island to accommodate a number of camera lenses, LED flash, and maybe other sensors as well. This isn’t the first time we’re seeing the Pixel 6 smartphones and we believe more will be revealed until the official Pixel launch.

Just recently, several Pixel 6 Pro and Pixel 6 details were revealed. We learned it will work with the new Pixel Stand with twice the speed and charging power. The phones can also be charged fast with the 30W USB-C charger.

Design-wise, the device will shine through because of the translucent material. It’s also sustainable as the case is made with more than 30% post-consumer recycled plastics.

If that leaked Pixel 6 assembly video showed the phone’s inner components, several leaked information have revealed other things. We can be certain of the Google Tensor processor for on-device AI function.

The Pixel 6 Pro will feature a 50MP camera that can capture 150% more light, telephoto lens, 20x with Super Res Zoom, and 4x optical magnification plus a 12MP ultra wide camera. The selfie shooter will offer 94-degree field of view. The Pixel 6 will only get the 50MP + 12MP ultra wide camera sans telephoto. Other camera features include Night Sight, Portrait Mode, Face Unblur, and Magic Eraser AI tool. We’ll confirm everything on October 19.