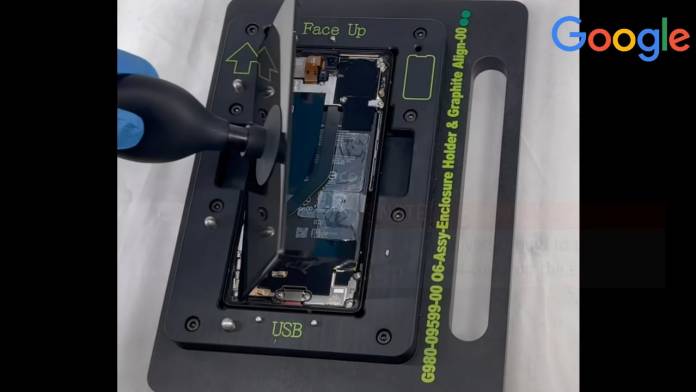 The Pixel 6 series is set to go official on October 19, and already the phones have garnered too much limelight. To be precise, the tech community is filled with Pixel 6 news every other day. In the latest development, two unofficial videos of Pixel 6 Pro assembly and disassembly were spotted on the internet. These videos however were removed later following a copyright claim by Google. Leaving it behind, the YouTube channel in question has now posted a video of the Pixel 6 innards giving users a sneak peek at the announced Pixel device.

This video demonstration posted on the Zeus Olympus YouTube channel is a service manual of a kind for meticulously putting together the Pixel 6 device without causing damage to the internal components. The Pixel 6 video doesn’t have a voiceover but has visual captions to make the process more understandable for a neutral user.

In the demonstration, the microphone assembly is shown in the initial phase, followed by the main logic board assembly, and the matte side rails can be seen as the SIM tray is inserted. The top speaker in the left-hand corner can be seen in this first stint of the assembly.

Then the video moves on to confirm that the phone has a 4,614 mAh (17.81Wh) battery – slightly smaller than that of the Pixel 6 Pro spotted in the earlier video. Since the Pixel 6 skips the telephoto lens, the rear camera module is more compact and doesn’t take up much space.

The application of the graphite sheets on the phone are also clearer with this demonstration. The mmWave model has the 5G module right above the cameras while the front-facing camera is smaller than the Pixel 6 Pro’s – quite understandably.

We presume this video could be deleted anytime soon, just like the other two Pixel 6 Pro videos. So, if you actually want to consider buying the Pixel 6, it is recommended that you download it to delve deeper into the details, just in case the need arises.