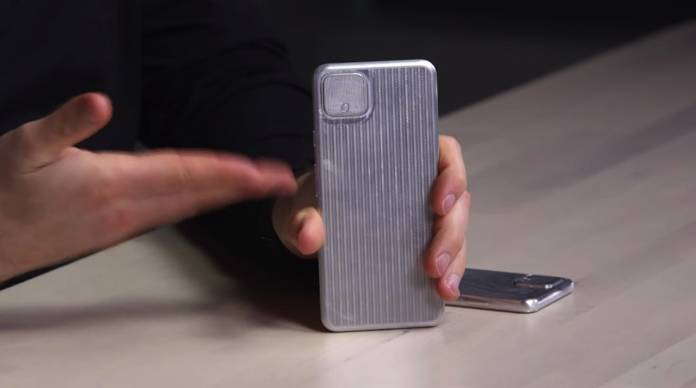 The Pixel series has always been controversial but we’re not dismissing the phones. Google’s very own phone collection is still a great option if you’re the kind of mobile consumer that wants to be regularly updated. The Pixel 3 and 3XL and the newly announced Pixel 3a and 3a XL have several reported issues. They are still up for the appropriate fixes but we’ve started to anticipate for the Pixel 4. As early as February, we learned Android Q on the Pixel 4 will have improved Dual SIM function.

Some Google Pixel 4 and Pixel 4 XL image renders showed the dual rear and dual selfie shooters. A Pixel 4 is definitely in the works as an AOSP reference proved the next-gen flagship is almost ready.

Unbox Therapy has published a video on YouTube, showing off two metallic phones that are said to be the Pixel 4 and Pixel 4 XL. They’re not really phones but “objects” used for designing and production of upcoming devices. These are models OEMs and accessory makers use to make phone cases and other accessories.

You can say these are mockups. They don’t mention any specs but explain the large camera module could mean more cameras. There will probably be two or more sensors. No quad cam system yet because the square could only hold three plus an LED flash.

The Pixel 4 and Pixel 4 XL may be similar in form and size to the Pixel 3 and Pixel 3 XL. The front shows near bezel-less displays and a notch for each. This means Google isn’t going the direction of punch hole selfie camera yet.

Everything is speculation at this point. We just believe Google won’t be implementing an on-screen fingerprint sensor yet. The Active Edge sensor may still be used.