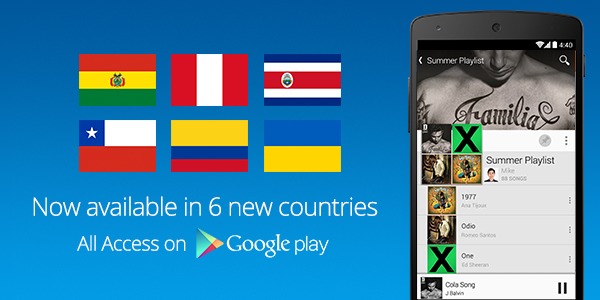 It’s not exactly Update Wednesday, but Google is indeed updating its membership list for its digital services and devices. In this round, Google is bringing its music cloud storage and streaming service to 6 more territories, while its Chromecast streaming dongle is now available in just one more country.

The lucky list of new initiates to Google’s musical party includes Bolivia, Chile, Colombia, Costa Rica, Peru and Ukraine. All six of these will have access to both the free Play Music streaming service as well as the subscription-based All Access. This puts the total roster of countries to 34.

In terms of hardware, Google is making the Chromecast available to yet another European country, this time in Ireland. Chromecast’s expansion has been going on rather slowly after brief growth spurts in March and May. Now there are 19 places where one can buy Chromecast directly from Google Play Store, though there are always other options available for those outside these regions.

For those lucky to have a Chromecast in their hands, or actually on their TVs, they will be able to enjoy some of the new abilities that the tiny HDMI device has been given. In particular, Android users will be able to cast the contents of their screen to Chromecast, as long as they have a device officially supported by Google, or from any Android device, with a bit of help from MirrorEnabler.