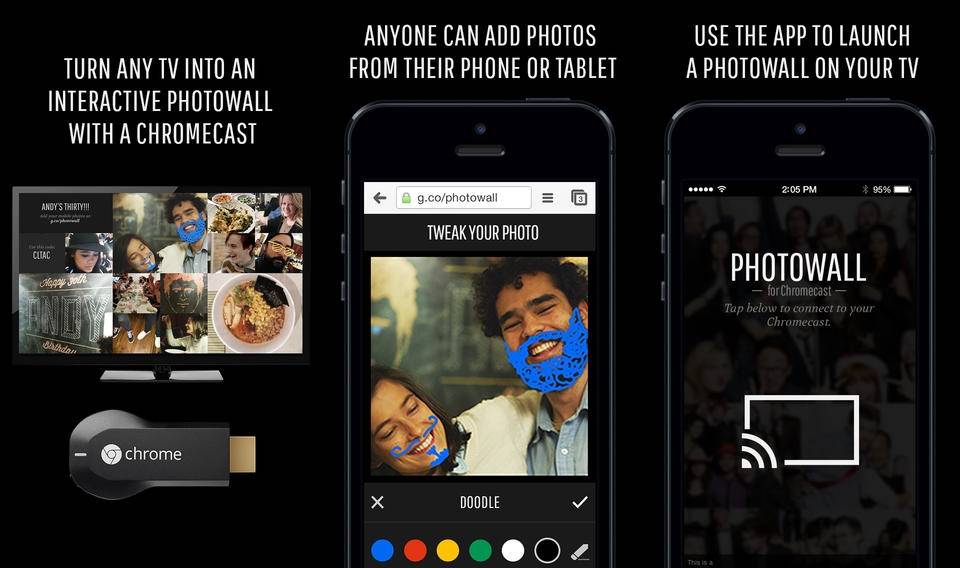 Google has released a new app for Chromecast this morning. The app is called Photowall for Chromecast and is touted as being “a new Chrome Experiment that lets people collaborate with images on the TV.” Essentially, Photowall turns your Chromecast into an interactive photo frame.

That having been said, there is a catch with the release of this app. Google has it available only for iOS, and so far there hasn’t been any mention of when, or if it will be arriving on the Android side. In hopes Android users will be seeing the Photowall app in the Play Store — the app allows users to take a picture and sent it to the big screen.

Users can also do a bit of creative editing. Slightly more interesting is the bit about YouTube. Once finished with the Photowall session, Google will automatically generate a YouTube video of the experience. This video can then be shared with those who participated. We suspect the video could also be used to show others the fun they missed out on.

While we are a bit disappointed to not see this one arrive for Android at launch, we have seen some goodies on the Android side. The folks at Dayframe recently added Chromecast support for all users. Not to mention, the recent updates from Pocket Casts and Plex as well as the MyCastScreen app that pushes timely info to your television.

[Update] Google has offered more of an official announcement for Photowall. Details coming from the Official Chrome Blog touch on how the Photowall app will be available for Android. The app is expected to arrive in the Play Store as of today.