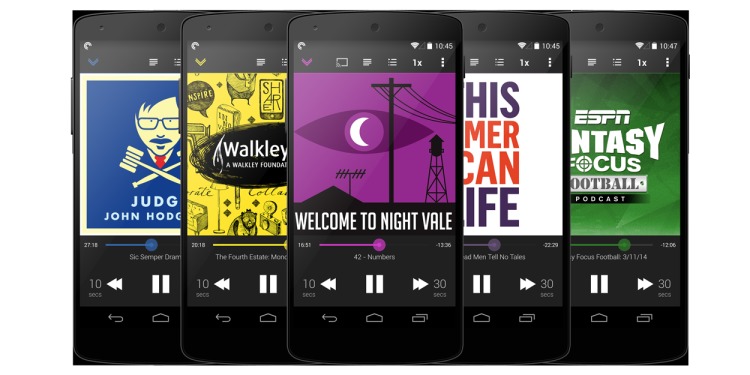 Pocket Casts can be found in the Google Play Store, though current users will likely want to grab the update direct from their device. Just launch the Play Store and head to the My apps section. This latest update will bring the app to v4.5 and it is being touted as the best yet.

And for those wondering how the best yet can be justified by the addition of Chromecast support — there is more involved here. The Shifty Jelly team also mentioned the up next playlist, colorful awesomeness, a modern Android interface and enhancements galore. Basically, while the Chromecast support may be the highlight change, it wasn’t the only change.

The up next playlist is one that can be accessed by flicking right on the now playing screen. And nicely, the playlist order can be rearranged, and you can also skip between items on the playlist. The colorful awesomeness deals with cover art. Pocket Casts will automatically detect colors from said artwork and then brighten the interface in what is described as “subtle, but powerful ways.”

Otherwise, the remaining two items on the changelog sit as follows;