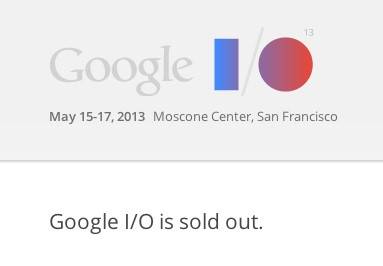 As we were expecting to happen, Google I/O 2013 has sold out. And done so rather quickly at that. A visit to the 2013 I/O registration page shows that registration is closed and “Google I/O is sold out.” Unofficial time reports have I/O as selling out in roughly 45 to 50 minutes, which is a bit slower as compared to last years event.

The I/O tickets sold out in under 30 minutes last year. This years sell out time was actually closer to what we saw in 2011 when they sold out in just under an hour. Of course, nothing has compared to I/O 2009 and 2010 when it took 90 days and 50 days respectively. Basically, it seems people got wise to the freebies and more people decided to attend the event.

Now that you have missed out on a ticket, and the possibility of some extra goodies for attending — what is there to do. For starters, there is plenty of Google I/O related coverage. In fact, you can expect to see complete coverage right here. Google also streams much of the event. Not to mention, they also offer the videos for viewing on your own schedule.

While there is still some debate as to what 2013 will bring, we do have previous years to judge. I/O 2012 saw the official announcement of Android 4.1 Jelly Bean along with the Nexus 7 and well, also the Nexus Q. That last one didn’t fare so well, however 2012 attendees were also treated with the over-the-top Google Glass demonstration.

We are still curious to see what the official sell-out time will be. Google has yet to say anything on that topic, however we have been hearing from quite a few potential attendees that were greeted with the message you see in the above screen capture. You know, the one that had users trying again, because while a ticket could not be found, there may still be some left.

Basically, as we have seen in the past, Google I/O 2013 went as expected — that is to say it sold out fairly quickly and saw a fair amount of complaints from those who wanted to attend but could not buy tickets. All that aside, what are you expecting and/or hoping to see this year? And remember, Google I/O 2013 will run from May 15 – 17 and Android Community will be in attendance to share the news.