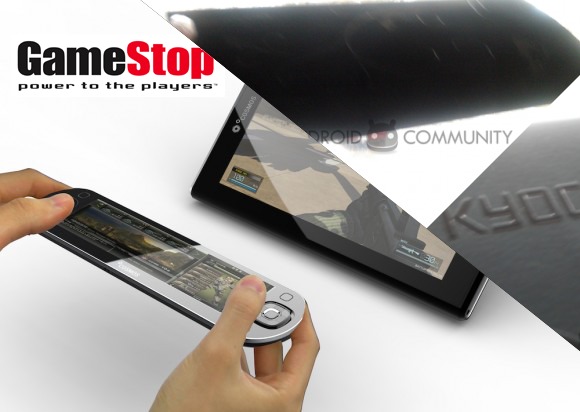 Word on the street is that there’s going to be a new gaming tablet… on the streets. GameStop company president Tony Bartel has commented this week about how they’re currently in testing mode for an Android-based tablet that they’ve also already started working on a gaming controller for as well. This tablet will be, as Bartel calls it, a “GameStop certified gaming platform” and that it’ll start with a few games and build up and up and up and explode all over the gaming industry similar to what we’ve seen (to a degree) with OnLive with HTC and other related groups.

Could this finally be the legendary Kyocera Katsura “Gaming Tablet”? We think not, but it’s interesting to see how only a few months ago we were putting that term in quotation marks because it seemed perhaps to be a bit absurd, or certainly relatively unheard of at that point. The quote above about the “certified gaming platform” comes from an interview between Bartel and GamesIndustry in which they also once again confirm the Android portion of this equation. More than likely there will be the mentioned wireless controller connecting via bluetooth, this soon to capitalize on what’s about to be a rather explosive external controller-controlled Android gaming market.

“There’s not a lot of tablet/android based games for the consumer that are designed to use an external controller,” Bartel suggests. “There are a few games out there and more that are coming, but our thought is that the tablet is a great immersive gaming device so it’s hard for us to envision how that tablet will really function as such without some sort of controller.”

Like what we’ve seen for a while with processor manufacturers such as NVIDIA, GameStop will be working with developers to create games specifically workable with wireless gaming controllers so that the industry GameStop intends on capitalizing upon does, indeed, exist.