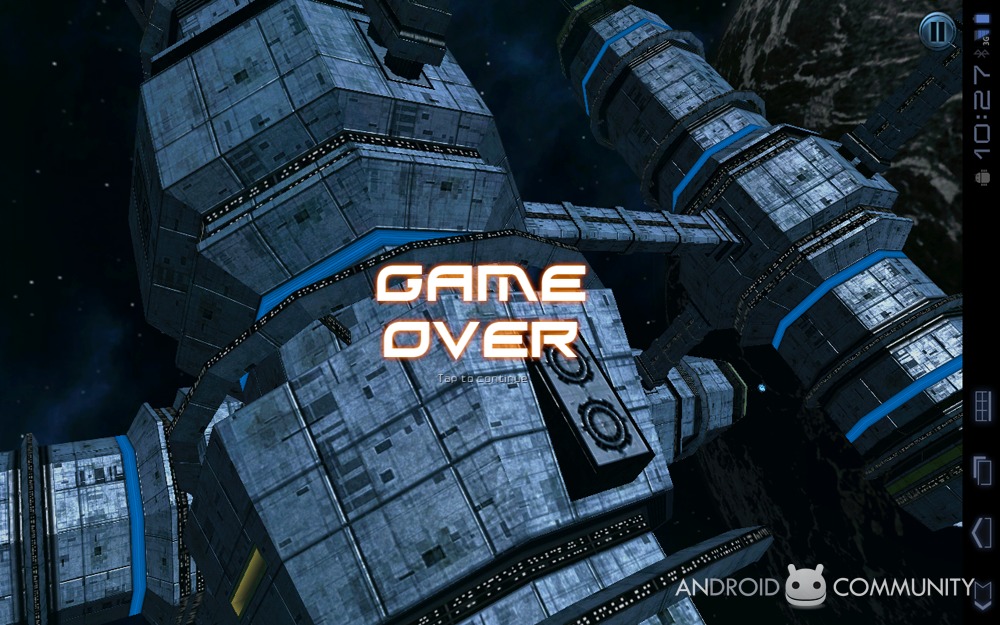 Welcome to our review of an early version of the game Galaxy on Fire 2, an NVIDIA Tegra 2 optimized game which we’re testing out on our Motorola XOOM tablet running Android 3.0 Honeycomb. This game is not yet released to the public, slated to be let loose some time during the month of March 2011. Galaxy on Fire 2 is a space battle game that takes place in a future not unlike the “used future” of ALIEN or Star Wars. It’s in this universe that you, a space pilot with terrible luck, are sucked through a wormhole to the other end of the galaxy – from there you must fight your way back home by earning cash doing odd jobs in mining and the blasting of enemy ships. Han Solo much?

The first and last thing you’re going to notice in this game is its utter seamlessness. From screen to screen, gameplay to menu, cinematic to gameplay, gameplay to dead to gameplay, start to finish, the longest load screen we’ve experienced has been 3 seconds. That’s no exaggeration. Three whole seconds is the longest time we had to wait between two screens. There’s been no lag, no choppiness of any kind, and no break in graphics. Even the suns shine brightly as you pass them by without you yourself having a moment’s pause. 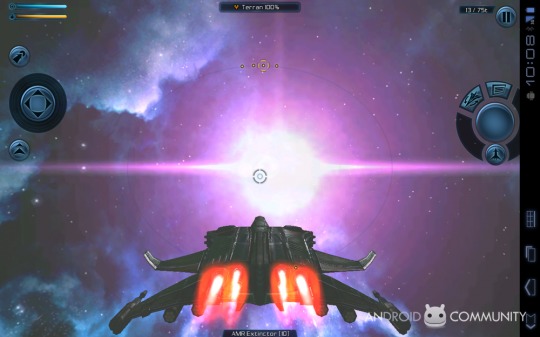 As you’ll see in the demo/review video, you’re able to visit a lounge and a map area in addition to the loading bay where your ship is docked. The lounge is a place where you’re shown approximately three space jockeys looking to either sell you their services or hire you to do a mission for them. These are the sort of people you’d never want to talk to in real life, but here, you need some money and you’re willing to kill for it. The map area will help you attain your goals as well as with it you’ll be able to traverse the universe with ease. 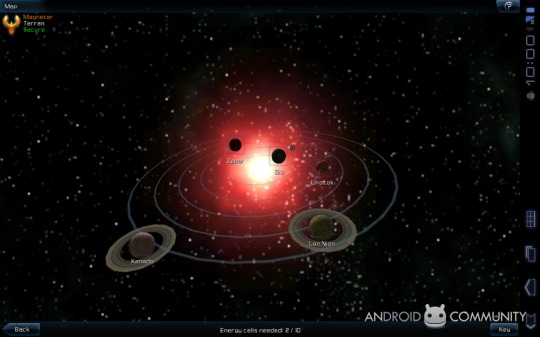 Behold, as you look upon the map, the magic in your fingertips as you explore the greater universe, then each planet cluster, then with a tap of your digit, you’re on your way to more missions. A similar situation is going on in the dock, where you’re able to instantly view a 360 degree turntable of your current ship. In the dock you’re able to trade the money you’ve earned for new ships, weapons, and helpers. Everything having to do with the menus, aside from the Honeycomb standard they’ve decided to keep, is wonderful, intuitive, and taps real easy. The menu from Honeycomb decides to stick itself to the right side of the screen where it ends up messing with your game several times a session. Guys, if you’re reading this, find a way to lock that down or just get rid of it altogether. 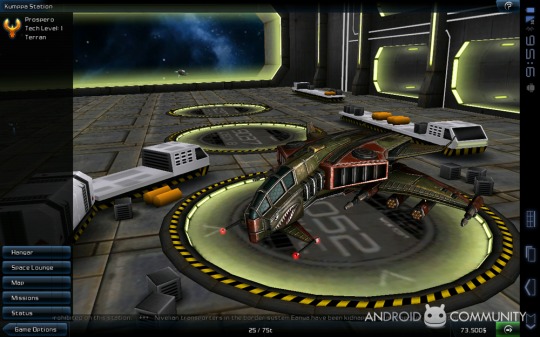 At this point let me remind you that the version of the game we’ve got here is a pre-release and is by no means a finished product. As evidenced by the complete lack of sounds and music, this game is not yet complete and is therefor subject to slightly less intense judgement by yours truly. Not that it’d need a break though, as this is the first game we’ve played since X-Wing vs Tie-Fighter where we didn’t mind the vertigo at all – just bring on the ships so we can knock em down! 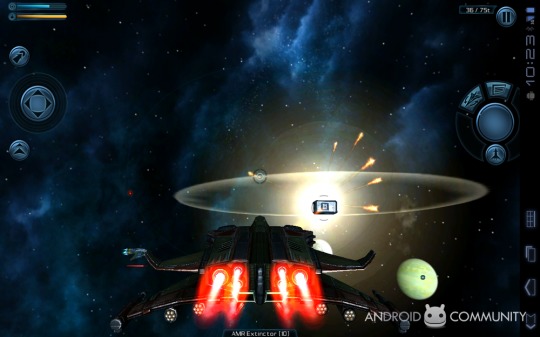 Space battle, aka the main gameplay of the project, is completely smooth no matter how much madness is going on inside or around your viewing area. When you’re in space, you make your own rules. You can friendly-fire on your pals if you like, and if you do it long enough, they’ll turn against you like you’ve turned against them, a point at which its time to dispense with the pleasantries and start blowing stuff up! 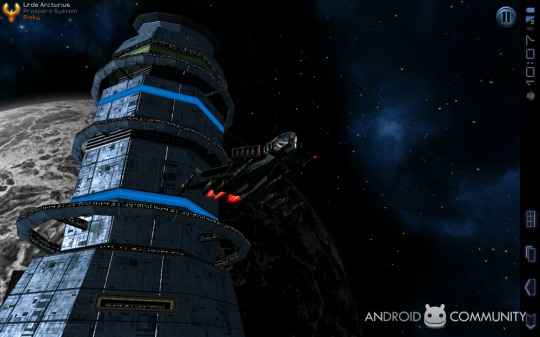 In space there is no such thing as haze or cloudy dust. When Ridley Scott was told that he couldn’t do the coffin scene in ALIEN the way he’d planned because “there’s no smoke in space,” he simply replied, “there is now, mate.” The same is true here in gameplay, with smoke and haze floating all around you – the main reason certainly being to show how much space is being moved through, to show the player at which speed they were jamming around corners without having to use other ships as relative motion displays.

The universe you fly in is so large that once you’ve floated more than a couple miles away from the space station, it takes you a few minutes to fly back to it – in what appears to be real time! This game does not mess around, creating for everyone a universe in which Chewbacca himself could easily run around finding pilots to pledge his life to. This game will be released some time in March 2011. 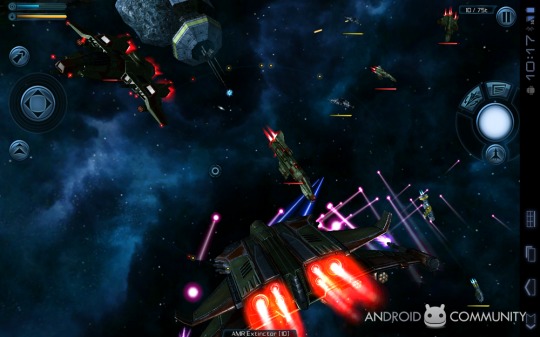 While you’re waiting for this game to come out, head over to the NVIDIA Tegra Optimized Mini Game Guide 2011 of, if you’re in to single apps doing everything awesome for you in the form of games introductions, head to our NVIDIA Tegra Zone Review Guide for Super Chip Device Owners! Then tell us if you’ve got any other examples of games or general apps that’ve been working extremely well on your Tegra 2 device. It’s simple things like that that make a random set of apps into a real suite. 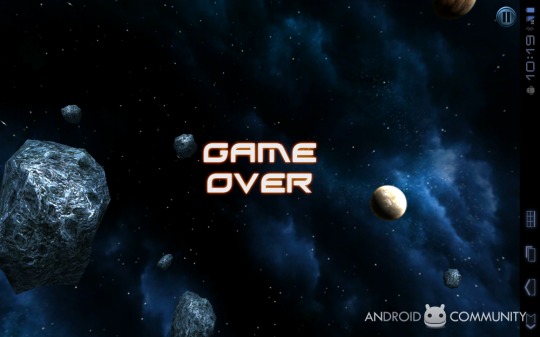