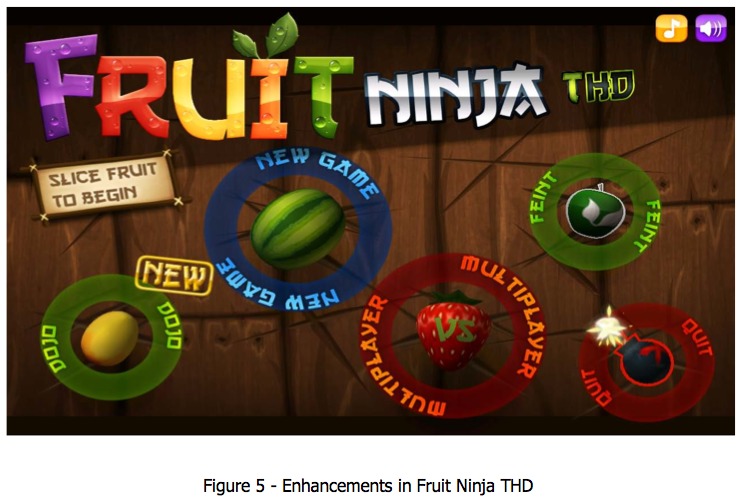 We’ve got a good friend in high places (NVIDIA) who’s handed us a guide on what makes a game worthy (essentially) of carrying the NVIDIA Tegra seal of approval. Now these games are made by designers and engineers who have extraordinary talent, so NVIDIA certainly doesn’t pretend to be the authority on how amazing a game can be, but the crews who work on these games have been glad to work with NIVIDIA to optimize everything from graphics to quick movements in the Tegra environment. Would you like some specific examples of how a few amazing new games work better than they ever have before now that they’ve got an optimized high-five from NVIDIA?

NVIDIA sends their Content Development team around to the crews who make these following games and has them help make the games amazing so that NVIDIA’s Tegra 2 based devices will be shown to be the most fabulous they can be. The following criteria must be met in order for a game to be called “Premium Tegra optimized games:”

• Visually realistic looking scene objects and character that use much more geometry, higher resolution textures, and complex shaders.
• Highly interactive gaming that employs larger number of characters on screen and more instances of independent animation.
• More challenging games that use advanced Artificial Intelligence (AI) processing with complex worlds and player management.
• Premium levels that are only accessible via Tegra-based devices and additional game character equipment and special moves that are unlocked on Tegra based devices.

The following games are already or will soon be available via the brand spanking new app NVIDIA Tegra Zone which we also just happen to have a review of. Have a look at that [here], then take a peek at these ever-loving NVIDIA spectacular apps: 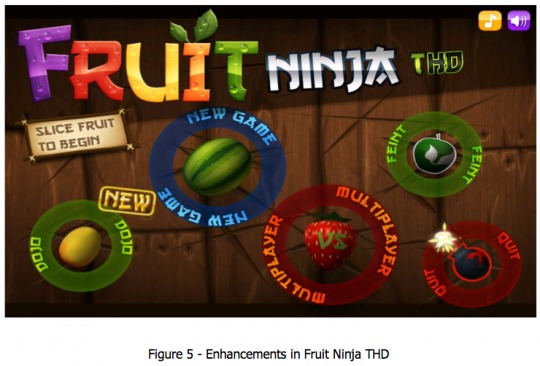 Fruit Ninja THD
If you’ve ever played a game on an Android device or have been basically anywhere inside the Android Marketplace, you probably know about Fruit Ninja. Why would they pick this game to work with? Because since the game is so simple, little changes appear giant. A short list of additions and modifications done to this game in collaboration with NVIDIA: 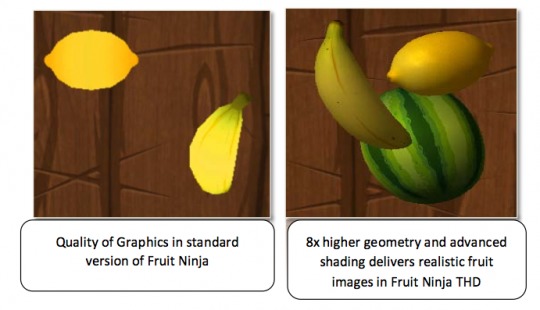 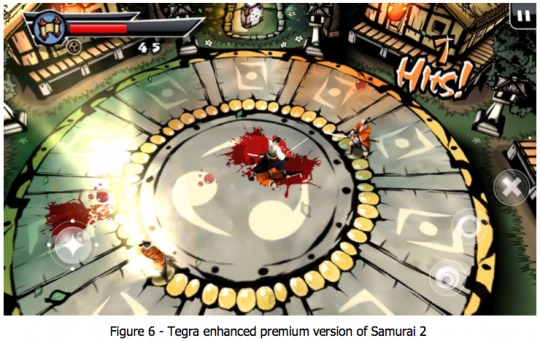 Samurai II: Vengeance THD
This is a game where you run around chopping people up instead of just fruits and bombs. An insanely flat-yet-deep environment inside a world where you’re a sword-wielding hero who must survive by slicing up enemies, this is the joystick game you’ll get a chop and a half out of. The following list of items are NVIDIA enhancements: 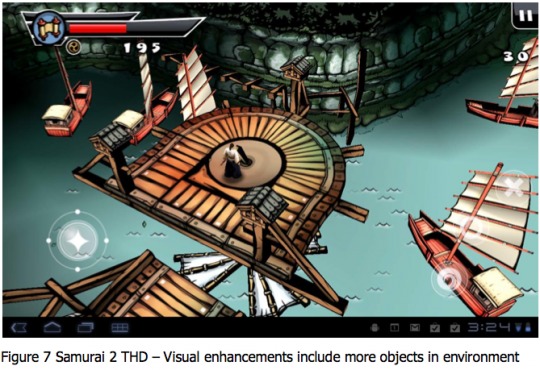 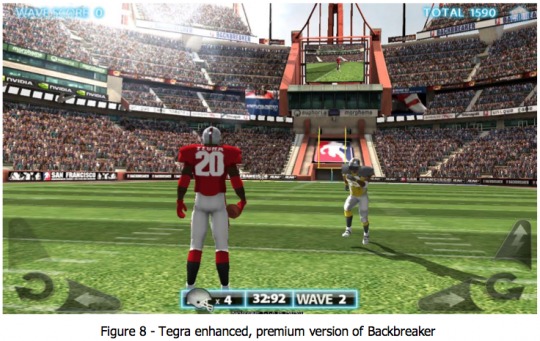 Backbreaker THD
For those sports-hungry Android fans, this is the football game you’ll want to pick up. This is one of those games that’s essentially the same no matter which platform you use it on, but with NVIDIA on board for this Android version, you know you’re getting a hot list of enhancements:

• High quality textures on the characters, field, and the arena
• More rendered content such as the real time action replay on the Jumbotron
• Realistic shadow effects and dynamic lighting effects such as lens flares
• Fully animated spectators that fill all levels of the arena 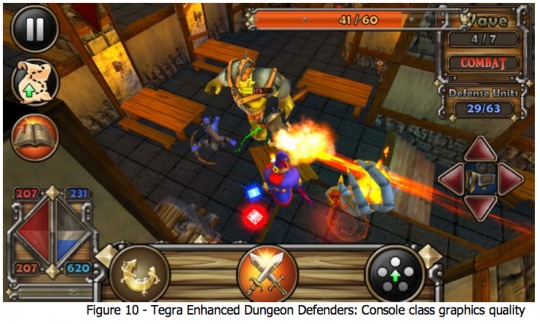 Dungeon Defenders First Wave Deluxe HD
THE game used as an example of how a chip can dominate over the past few months. This game is an RPG which you can play on PC, PlayStation 3, Xbox 360, or Tegra-based mobile device. Because of the GeForce Class GPU in the Tegra mobile processor, this game has the same rich four-player experience no matter your platform. Although you may have enjoyed the standard version in the Android Marketplace up till this point, what with its six levels of game play and 20 different types of equipment, you’re in for a much bigger and better ride this time around:

• Dynamic lighting schemes and advanced post-processing effects.
• High polygon count characters to deliver the same look and effects as on a PC or a PS3
console.
• Same number of maps and same level of map complexity as that available on PC and PS3
• Access to all twelve game play levels as available on PC and PS3 versions, and enables access to over 60 different equipment and weaponry choices 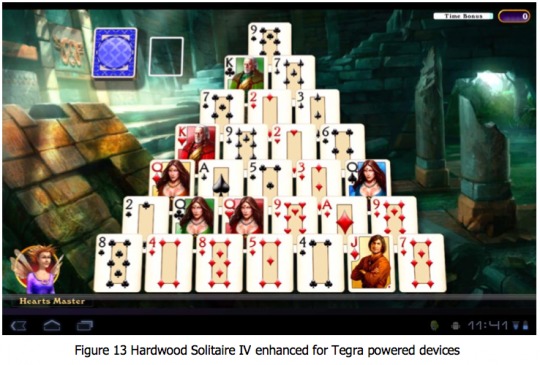 Hardwood Solitaire IV
What’s a tablet computer without a few good card games? This is a game where NVIDIA’s interest lies not in the massive blasts of colorful graphic explosions, but in real-time lightings, shadows, and environment. This is a card game in 1080p high-resolution textures for both sides of the cards, realistic flipping of the cards, and surprise, an excellent user interface for smoothness in playing the game. 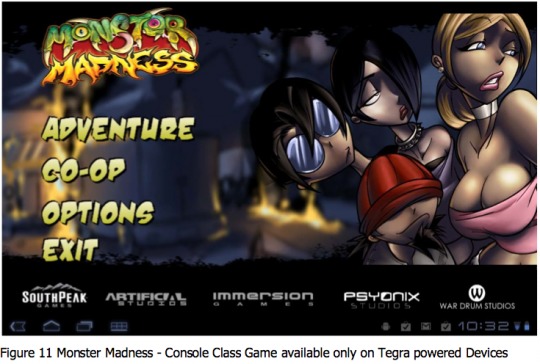 Monster Madness
This game is another one of those flagship games used as an example for whichever platform it happens to be played on. In this case it’s shown up several times on the XOOM, and here with NVIDIA joining in on the party for optimization, this is a game to be reckoned with. It’s got an Unlreal 3.0 engine and is what they’re saying to be identical to the console version in every regard. You’ll be playing multi-player co-op mode over Wifi, knock down interactive environments chock-full of destructible elements, and generally annihilating over SEVENTY different monster types. There’s also drivable vehicles with player-driven turrets, over a hundred power-up options, and one heck of a lot of fun to be had. 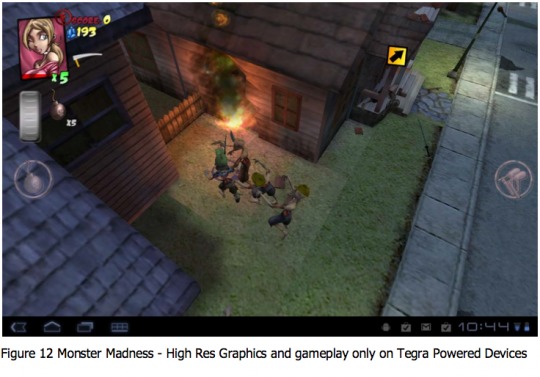 You can find out more about all of these games in the NVIDIA Tegra Zone app we also have reviewed on Android Community – check it out and/or download the app from the Android Marketplace! 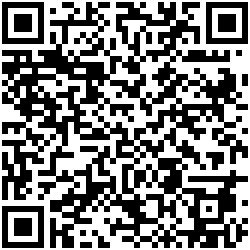