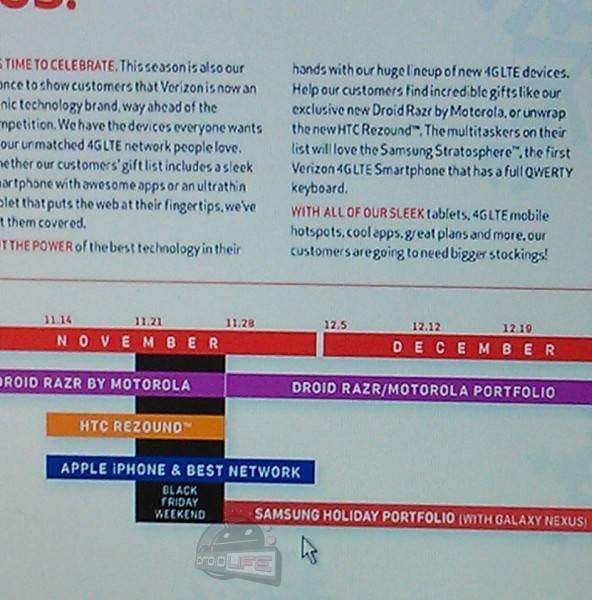 Bummer. Some recent internal documents are indicating that the Samsung Galaxy Nexus, Google’s next developer phone, the first device with Ice Cream Sandwich and pretty much the object of every Android fanboy’s desire, may not be arriving on the carrier until after Thanksgiving. A timeline for Verizon’s advertising campaigns put the Galaxy Nexus in the “Samsung Holiday Portfolio”, which will begin on November 28th, after the weekend of Black Friday.

The news isn’t all that surprising. Verizon has a ton of truly awesome phones landing at the same time: the DROID RAZR hits on November the 10th, the HTC Rezound will (probably) be announced on the 3rd, and according to the advertising calendar, hit retail or at least advertising channels on November 14th. That’s three major phones, any one of which could carry a manufacturer or wireless carrier’s smartphone campaign for six weeks or so. Verizon is probably staggering the Galaxy Nexus to give the DROID RAZR and HTC Rezound some time to rack up a few early adopter sales. 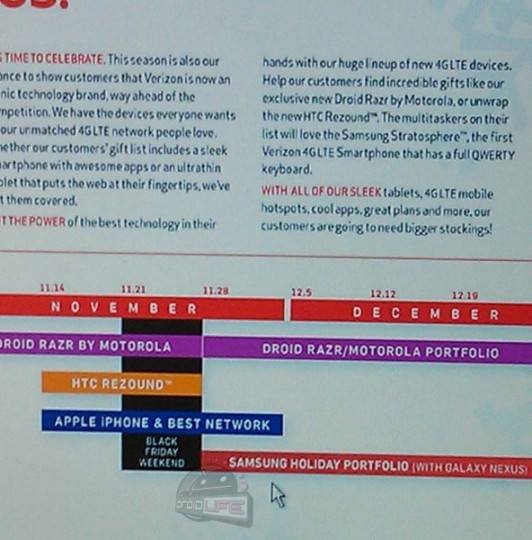 It’s not all bad news – at least we’ve got a more definite timeframe for the Nexus’ release, so those of us who’ll be shelling out $600+ off-contract (like your truly) can have time to soften the fiscal blow. Note as well that the two December campaigns for Samsung and Motorola say “Portfolio”, meaning we’ll probably get to see some other devices along with the current flagships. The DROID 4 and XOOM 2 seem like possible candidates for Motorola, while we can hope (and pray, and cross our fingers and such) that the Galaxy Note may be part of the Samsung portfolio.