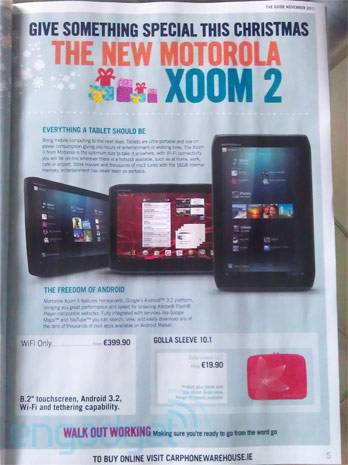 It looks like the much-rumored XOOM 2 is spending the holidays in the Emerald Isle. A print ad from the Irish arm of Carphone Warehouse has outed the new Honeycomb tablet, this time in its smaller 8.2-inch form. The Wifi tablet will run you €399.90, or about $545 – US residents, remember that electronics are generally more expensive across the pond, so an American price of $450-$500 is more likely.

According to the ad, the Wifi version features Honeycomb 3.2 (not Ice Cream Sandwich) and “tethering capability”, though on a Wifi-only tablet, I’m not sure what good that’ll do. You can just barely make out a “16GB” in the tiny type, so it appears this smaller “Media Edition” will be the cheapest of the new XOOMs available. A 10-inch version is also in the works, but so far it hasn’t showed up outside of spy photos.

Both 8 and 10-inch versions of the next-generation XOOM have been spotted at the FCC and in in some leaked photos. Specifications are hard to come by, but a November release seems likely, and a Verizon LTE version should be available in addition to the standard Wifi. The design seems to have changed a lot since the original XOOM, with what looks like soft-touch plastic ringing a metal back, and tapered edges (like the DROID RAZR and Photon) to fend off Apple’s lawyers.