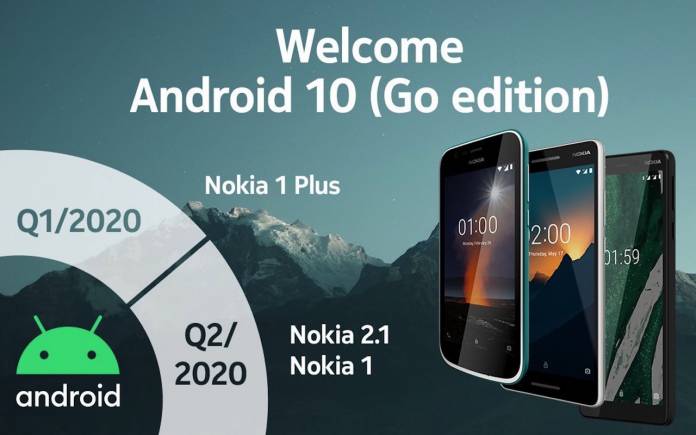 More Nokia phones will receive Android 10. By Q4 2019, HMD Global will roll out the latest Android OS version to about a dozen Nokia smartphones. Back then, it was pure Android 10. No information was provided for entry-level devices until this week that the Android team announced the Android 10 Go Edition. HMD’s Chief Product Officer Juho Sarvikas announced the good news over Twitter. He noted that “entry-level smartphone experience should not be a compromise” and the Go Edition will be available soon.

With the intention of updating the mobile platform, improving better memory management, and enhancing security and performance, the Android 10 Go Edition will be released. When exactly? The Nokia group said Q1 2020 for the Nokia 1 Plus. The Nokia 1 and Nokia 2.1 will receive the update in the second quarter next year.

It was only yesterday that the Android developers announced the Android 10 Go Edition would be ready for more budget smartphones. By budget, we mean phones with only 1.5GB of RAM onboard. Entry-level smartphones from Nokia still run on Android but they are definitely lighter. They’re not as powerful. The Nokia 1 received Android 9 Pie Edition only last June. The Nokia 1 Plus was released with the same Go Edition out of the box.

Android 10 (Go edition) will be easier to load and update. This will ensure those entry-level smartphones are up-to-date. It will deliver additional speed plus enhanced security.

The Nokia 1, Nokia 1 Plus, and the Nokia 2.1 are only three of entry-level Nokia phones mentioned. We’re expecting more will be added to the list and maybe upgraded to Android 10 Go Edition.