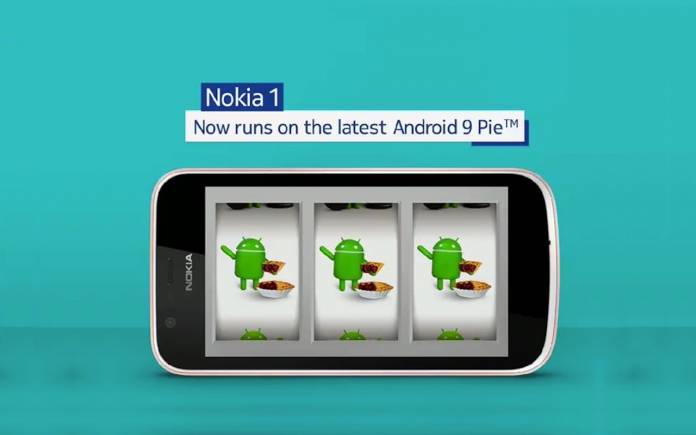 Just in case you’ve been living under a rock, HMD Global has a very affordable phone in the Nokia 1. The brand’s low-cost Android phone was first heard almost two years ago. We were told it would arrive as a new budget Android Go phone. An early APK teardown revealed the device’s camera features. It was finally unleashed to the world running Android Go. Earlier this year, the Nokia 1 passed a Durability Test and so we know the phone is decent enough for its price.

Nokia’s most affordable Android phone is finally receiving an important update. It’s getting a slice of the Android 9 Pie as the rollout began yesterday. HMD Global’s Chief Product Officer Juho Sarvikas is proud to say that the “Nokia phones just keep getting better”. Getting Android 9 is important because it makes the phone more powerful and more useful with new functions and features.

The phone features very basic specs. It comes equipped with a small 4.5-inch FWVGA LCD screen with 854 × 480 resolution, 8GB onboard storage, 1GB RAM, 1.1 GHz quad-core MediaTek MT6737M processor, 2MP selfie camera, and a 2150mAh battery. The phone may have low specs but it works as a worthy Android phone because it doesn’t come with any bloatware.

When we say Android 9 Pie for Nokia 1, it still is the Go edition. You can check if the update is ready on your phone over Wi-Fi. Make sure you have enough battery and is connected to a reliable network to avoid unnecessary interruption during installation.

The phone doesn’t offer top performance and speed compared to other Android smartphones but you can survive with this one. It’s good as a secondary mobile device. It’s also good to give to your child if you want to stay connected. It’s something that offers basic smartphone functions like call, SMS, web browsing, and social networking.