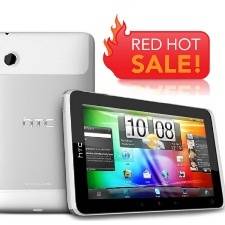 Rumors are flying that HTC’s first Android tablet will be seeing a significant price reduction soon. According to Phone Arena, Best Buy will be slashing the price of the wifi-only HTC Flyer to $300, a $200 reduction off the current retail price, next Thursday. If true, that could make the 7-incher a lot more attractive as the Android tablet market races to the bottom.

UPDATE: It looks like Best Buy is reducing the price even earlier, on Saturday, October 1st.

Reasons for the reduction are varied. First of all, the Flyer is definitely too expensive next to the $500 iPad and $400 Asus Transformer, both of which have a larger screen with a higher resolution. While the Flyer’s Gingerbread OS is a lot more capable that that of the Nook Color, mainstream consumers will have a hard time seeing the difference, capacitive stylus notwithstanding.

But the more immediate issue is probably the Amazon Kindle Fire, due in mid-November at a doorbusting price of just $199. Combine that with lowered expectations after the HP Touchpad $99 firesale and the Blackberry Playbook’s $299 price for a similar 16GB model, and it’s awfully hard to make a case for the Flyer’s comparatively high price tag. HTC is taking a lot of heat for its expensive tablets lately: the $700 on-contract price for the AT&T Jetsream drew scoffs from press and consumers alike.

Take this news with a grain of salt, as it comes from an anonymous tipster. A lowered price for the Flyer would certainly make it a lot more attractive, especially when the forthcoming Honeycomb update arrives. There’s no word yet on any similar price drops for the similar EVO View 4G, or whether or not the pricey stylus will also be reduced.