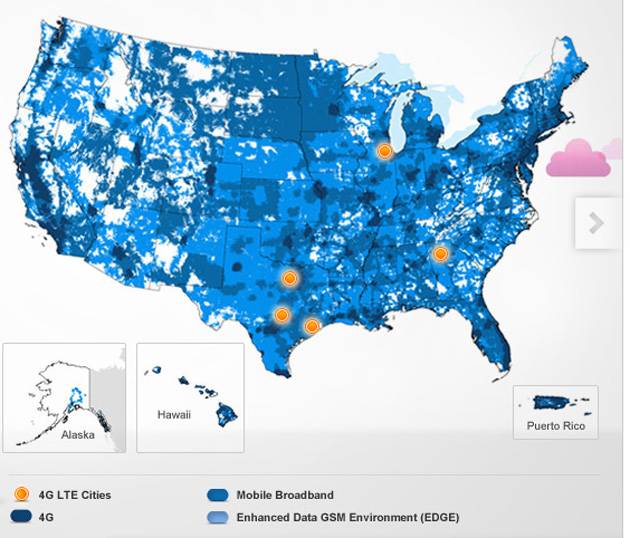 Despite its claims to “4G” prowess, AT&T’s Long Term Evolution network only covers five cities in the United States so far, and no AT&T phones operate with LTE radios. PC Mag got a rare response to their inquiries on the full nationwide rollout, and there’s some juicy information for AT&T Android users in the pipe. The first AT&T LTE phone will be released this year, though the carrier didn’t say from which manufacturer or which operating system it would use.

Unless you live in Houston, San Antonio, Dallas, Chicago or Atlanta, AT&T “4G” means HSPA+, an upgrade to existing 3G networks that’s speedy but not technically 4G. The company will only be advertising “4G LTE” in the markets that are currently receiving it, and presumably they’ll do some pre-marketing as new areas are added. Verizon already has true LTE 4G deployed in over a hundred markets, with more being added all the time.

Currently AT&T places the same data caps on LTE users as it does on mobile broadband and smartphone users on 3G networks, despite the extra bandwidth. The company dodged a question about whether it would raise or remove caps as phones and markets are added to the network – you can probably take that as a polite “no.” AT&T also refused to respond with a concrete answer on whether or not they’ll be offering roaming with Verizon LTE. This seams more plausible, but as you know in the ever-contentious wireless market, there are no guarantees.

AT&T is sticking to its guns with the proposed purchase of T-Mobile, despite the Justice Department’s objections. The company maintains that purchasing the smaller competitor outright will allow it to deploy more 3G and 4G spectrum efficiently, in a way that couldn’t be achieved by simply building new cell towers. It remains to be seen what AT&T will do if the merger is completely blocked.

AT&T was mum on its first smartphone LTE offerings, saying only that it would be selling its first LTE phone later this year. Since iOS is right out (no hardware updates will be coming until next summer at the very least), that leaves Android, Windows Phone 7, and Blackberry in a long third. We’ve already seen at least one possibility on that front, namely the HTC Holiday/Raider. The HTC Jetstream is the first tablet to work with the AT&T LTE network. While it didn’t announce any hardware plans, AT&T claimed in a previous statement that their LTE phones would be thinner and more battery-efficient than competitors – a definite shot at the somewhat chunky and short-lived Verizon phones like the HTC Thunderbolt and Motorola DROID BIONIC.