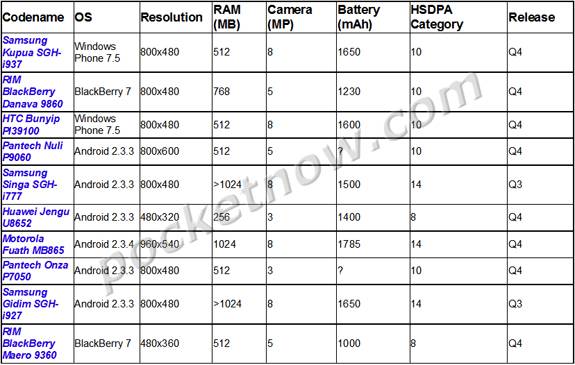 It appears that AT&T’s roadmap for the second half of 2011 has been leaked to the press. We recently saw a leaked roadmap of Samsung and none of the devices or numbers seem to be matching up but if this latest leak reveals anything, it’s that AT&T has plenty of Samsung phones on the way running Android.

Obviously we will ignore all that Windows Phone 7 and CrackBerry stuff and skip right to what matters, and that is the Android goods. First up we see the Pantech Nuli with an odd 800×600 resolution rather than the usual 800×480. We have seen a few Pantech leaks with 5″ displays but we can’t know for sure. Next up we see a few Samsung devices with the first one being the i777, it could be the rumored Galaxy S II headed for AT&T.

There is also mention of the Samsung Gidim SGH-i927 that could also be a variation of the Galaxy S II like the Slider we saw back in July. None of the Samsung devices are listed as Q4 but one could even be the recently spotted Samsung Impulse 4G LTE device.

Next up we’ll mention the Motorola MB865 “Fuath” as that is most likely the Atrix 4G refresh that some are calling the Dinara or even the Atrix HD. We have already seen a few pictures of that device and they can be seen here. Last but not least we also see a few mid-range type devices listed from Pantech and Huawei but I think everyone is more excited about the Samsung and Motorola devices on the chart. I did want to mention the HTC Holiday that was recently leaked running on AT&T was not on the list and we don’t really know what to make of that, but thought we’d mention it. We also don’t see the LG Thrill 4G mentioned one bit.

Either way it appears as if AT&T is gearing up for another strong few months in the world of Android, take that iPhone 5.