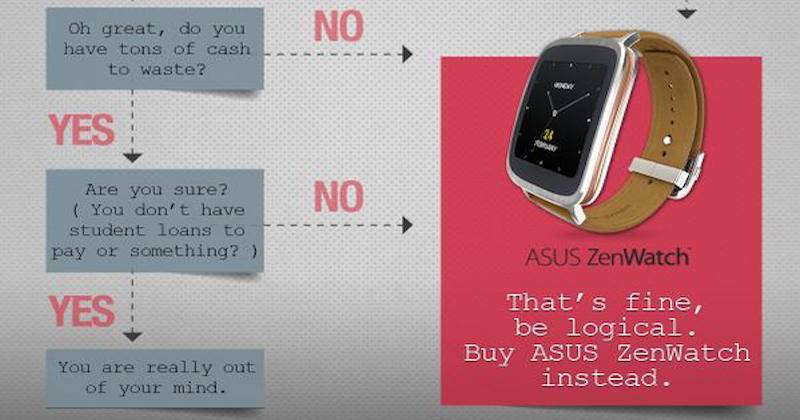 I think this is the first time I’ve seen ASUS bold enough to take a jab at Apple and be intense in advertising the latest ASUS ZenFone 2. Why, the Taiwanese manufacturer has just posted a handy shopping guide obviously making fun of the very expensive Apple Watch. ASUS referred to Apple’s first smartwatch as the “golden watch”. No mention exactly of the product but it’s very obvious.

It’s a funny flowchart that ultimately points to the ASUS ZenWatch as the best and most “logical” choice. ASUS is implying that the golden watch is expensive and a mighty waste of money. (It makes one feel unworthy and guilty of having bad debts too. Ouch.) Buying an Apple Watch is crazy because of the price and that you’re better off with the ASUS ZenWatch which is much more affordable at $199. 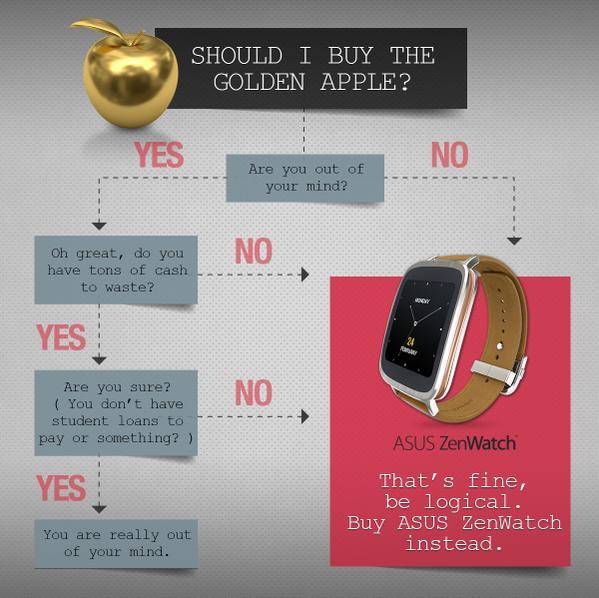 We’ve seen the ASUS ZenFone 2 at the CES 2015 earlier this year but it was only this week that the company released the smartphone  and announced the prices in Taiwan. ASUS also introduced some new ZenFone 2 accessories to improve one’s mobile experience.

And then yesterday, ASUS released a video overview of the phone. We’re not sure if this is an official ad because it runs over two minutes. However, it’s a good run-through of what we can expect from the latest ASUS smartphone.

The zen music in the beginning quickly caught my attention but it soon shifted to some disco electronica music that will make you get up and dance. It’s too dramatic what with the molten metal flowing into whatever when in reality, the ZenFone 2 is made of plastic. ASUS made sure to let us know that the phone is ergonomic with its arc design, has a stunning 5.5-inch Full HD IPS display, and has an impressive 13 megapixel Pixel Master camera that offers 400% better contrast.

This ASUS ZenFone comes in different models with varying specs. The high-end model boasts of 4GB RAM, a 3000mAh battery, a 64-bit 2.3GHz Intel processor, and a $290 price tag. That’s very affordable for a phone with high specs. ASUS also featured the BoostMaster technology which allows quick-charging of the phone (up to 60% within 39 minutes).