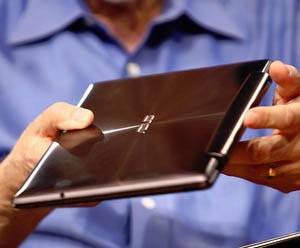 We’ve been seeing a lot of the Asus Transformer 2 in the last few days, and now it’s been confirmed by none other than Asus executive Jonney Shih. Shih spoke at the AsiaD conference hosted by All Things D, where he pulled out what is almost certainly a nearly complete EEE Pad Transformer 3 and its keyboard attachment. Shih also confirmed that the tablet is using “Nvidia’s quad core processor”, which to our ears sound like the Tegra 3.

Speaking on the original Transformer, Shih noted that it’s easily one of thew most popular Honeycomb tablets, and that Asus is on course to sell 2 million of them this year alone. He also said that the company has great hopes for Android 4.0 Ice Cream Sandwich, and that tablets running the new software may be coming before the end of the year. The Transformer 2, according to Shih, will be formally announced on November 9th, and that the 10-inch slate will be a mere 8.3mm thin.

Rumors of the Transformer successor have persisted since the summer, when we first heard that Nvidia’s “Kal-El” Tegra 3 processor might make its debut in the device. That would certainly line up with the new video that Nvidia was showing off, not to mention the sci-fi inspired video that dropped today. Shih’s November 9th date is just a little later than a UK online retailer’s guess at November 7th, but that gives us some hope that the tablet may be coming sooner rather than later. It’s a bit of a conundrum: since the original Transformer was so solid I’d like a crack at the Transformer 2 as fast as possible, but the longer the release date is dragged out, the more likely it is that it’ll come pre-loaded with Ice Cream Sandwich.

When asked about the PadPhone, the dockable phone-tablet combo that Asus showed off in concept form months ago, Shih said that the company expects the phone to go through the carrier gauntlet for a Q1 2012 release.