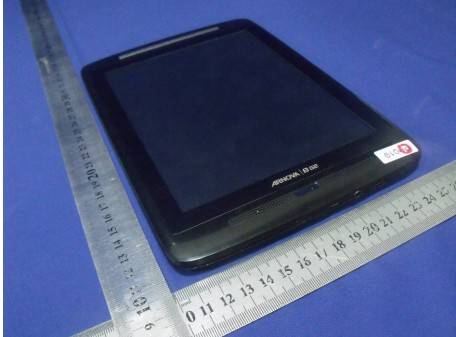 Archos and their latest entry into the Android tablet game has just hit the FCC showing us some pretty views of the internals as well as accessories headed to store shelves with the device. We recently saw it in the FCC already, but today we get a much clearer view of things.

The new line of Archos Tablets were announced back on June 23rd and since then we have seen them appear a few times but nothing to serious. In case you were confusing these with the new G9 series the Arnova tablets will be sporting Android 2.3 Gingerbread, a 1 Ghz CPU, and a few other decent specs and will be aimed at the mid-range tablet market with a very aggressive price point.

If a Gingerbread tablet isn’t your thing and you’d rather get a great priced Archos G9 Honeycomb tablet lucky for you we have already received some hands-on time with those so click that link and see for yourself. Even more video showing these upcoming tablets can be seen here.

So are you interested in something like the Galaxy Tab 10.1 or would you rather opt for the lower priced Archos options? The Arnova series should be a very cheap alternative for someone that doesn’t need the best. Are you interested in the Arnova line? Feel free to say hello in the comment section below.