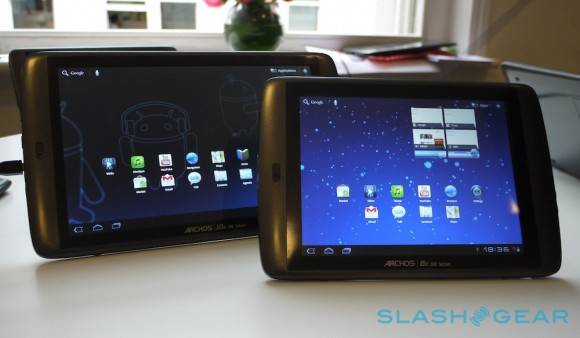 Last week we reported that Archos had two new tablets looking to shake things up on the way. The two slates, the 80 G9 and the 101 G9 may not be due out until September, but Chris Davies, at our sister site, SlashGear, has gotten an early peak at prototypes.

Archos, you may recall, has been making lower end Android tablets for awhile now. None of their devices until these have had the Android market though. These tablets are unique in a few other ways though. Both tablets will be running Honeycomb atop a dual-core, TI OMAP4 clocked at 1.5 GHz. Excitement at finally seeing a tablet with a different processor aside, Davies did find performance to be a bit slow compared to the current lineup of Tegra 2 tablets. Hopefully this is a result of the devices being prototypes, but Archos has not had a history for stellar performance.

The other exciting and new things the G9s offer include a full 250 GB hard drive, as well as the ability to inert a USB 3G dongle powered by a pay-as-you-go plan for mobile data. Davies didn’t have much to say about these pretty cool tricks, but they didn’t seem to be enough to wade off his concerns regarding the tablets’ quality. The hardware itself is similar to Archos previous work, but the 80 G9 offers a fresh take on Honeycomb, with its 4:3 aspect ratio. 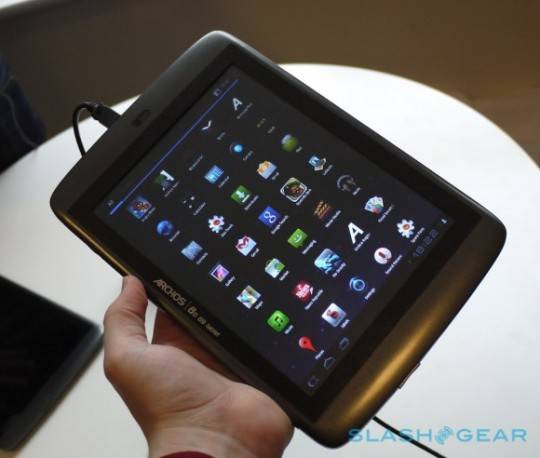 It’s clear that the Archos tablet won’t be competing against the likes of the Galaxy Tab 10.1, even with its .5 GHz bump in clock speed, but could carve a niche as king of lower end tablets. All concerns aside, this is a lot of awesome to stuff into a tablet for just $279, so long as performance shapes up a bit by the time it launches this fall. To see more of Davies opinion and his hands-on video, be sure to check out his original article.