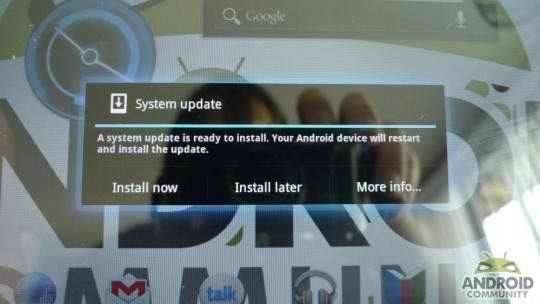 So you’ve got a Wi-Fi only XOOM, yes? You weirdo. You’re in luck! It appears that the shortly-awaited Android version 3.2 Honeycomb (one after the 3.1 that was pushed out right after this year’s Google I/O, that is,) is pushing out to Wi-Fi only XOOM owners now. This build code is HTJ85B, and you’ll have to go through the normal settings check to see if the update is available to you or not right this very moment!

From the emails we’ve received, it appears that the update is sweeping across the nation in no pattern whatsoever, instead hitting basically random ladies and gentlemen in the face with all the newest Android 3.2 features. These features include, as previously stated, the Zoom to fill screen function that we’re sure a lot of Android developers will be taking advantage of soon AND, yes, yes indeed, the longest awaited hardware activation of basically all time: SD card support!

It’s a celebration! Get out and click down into your settings and check for some hardware updates, ladies and gentlemen, because it’s a party over hear and 3.2 takin’ over this XOOM, you know what I’m saying?

For everyone that needs a refresher, head all the way back to our review of the original Android 3.0 Honeycomb, aka the first Android optimized for tablets. Then take a look at what we got to see in Android 3.1 Honeycomb in another full review. This is the sort of stuff you’ll be seeing on all Android tablets (the good ones, at least) until later this year when Android 4.0 Ice Cream Sandwich is released, a new Android for all devices, not just handsets and not just tablets. Joy!