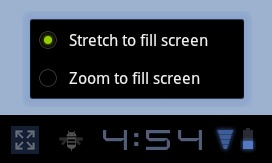 Android 3.0 Honeycomb has been gaining ground in the tablet market and while it is a great tablet OS and has an amazing multi-task feature among other things, the applications are still not fully there. With more and more tablet apps hitting the market each week the numbers for native tablet apps are still a little low. Recent info suggests Android 3.2 will be hitting the Motorola Xoom soon and it appears that Google is now working on the screen size issue for android applications.

Today on the Android Developer Blog they have outlined some changes coming to 3.2 Honeycomb that will offer a new mode for Apps on large screen devices.

Stretch to fill screen is already implemented in many apps and many work on large screen tablets already but they have the potential to stretch in odd ways and can sometimes mess with the layout and placement of things. The new Zoom to fill option will not stretch anything, rather it will run at the standard size and resolution but increase 200%. Similar to the current zoom option on that iDevice we hear about occasionally. The application will run in a window mode rather than fullscreen and be doubled.

The effect is that everything is bigger, but also more pixelated. This wont add to the list of Honeycomb tablet applications, but it will make those that don’t work or look right run better and give users an overall better experience on Android Honeycomb. Hopefully we see Android 3.2 Honeycomb roll out sometime in the next week or so like the link at the top suggested. We will have to wait and see.