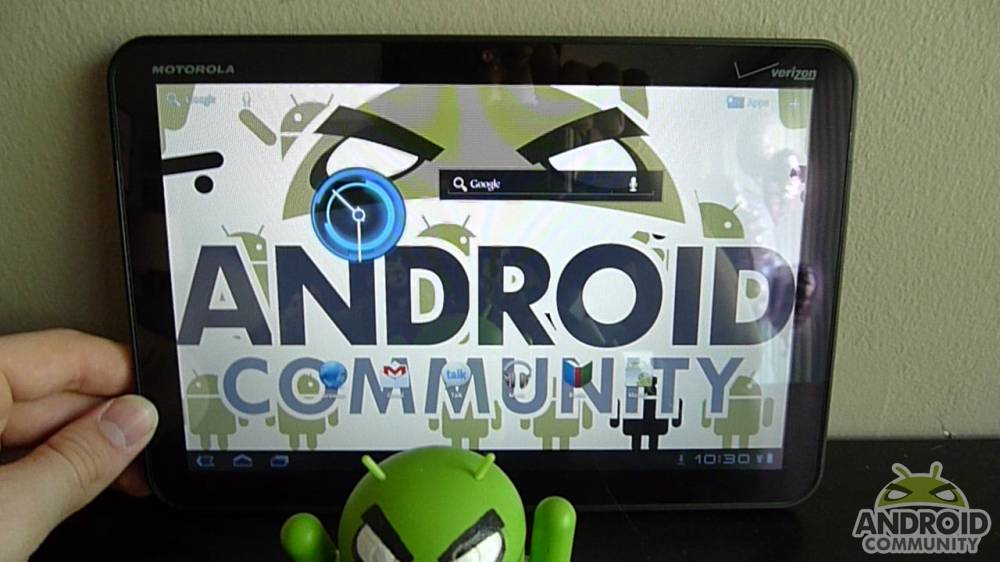 We’ve got our first official hands-on here with the newest mobile operating system to come out of Google’s labs, Android 3.1 Honeycomb. This is a relatively sparse update with only a few little bits for you to be bouncing around with, the most visible of which are involved in widgets, tasks, and USB connections. We’ve also got a special selection of benchmarks added up here for you to compare to our original tests when the Motorola XOOM (aka the first device to get this update) first came to our doorstep.

This newest tiny update to Google’s tablet-based mobile operating system is one that comes in several parts. Obviously as with any update there are speed improvements and bug fixes that are happening behind closed doors – but what can we see? Let’s have a look in the video below followed by a bit of expansion below:

What you’re seeing here is a run-through of the items presented by Google as the high points of this system upgrade. One of the items we’re not able to take a peek at quite yet for lack of the necessary connections is the USB upgrade – in the very near future, using a gaming controller to play all of your first-person shooter and side-scrolling jumper games will not be out of the question. In fact, in addition to being able to use things like Xbox controllers, keyboards, mice, and the like without so much as a driver, you’ll be able to work with devices you might not have ever dreamed of attaching to your tablet. Watch out, iPad.

You’re now given the ability to re-size widgets at will. Not a whole lot of widgets support this as of yet as their developers must still work this functionality into their code, but the few we do see here are pretty neat. We can wait for a full-screen Music app that looks like Music Beta. Check out our full review of [Music Beta] to see what I mean. Totally excellent. 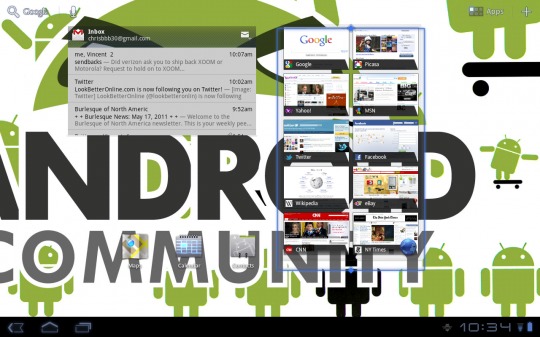 As you’ll only come to notice if you’re the sort of person who opens up 18 apps at once, you’re now able to scroll up and down through your tasks instead of being limited to a few. Between the video where I say “infinite” and now I’ve come to learn that the max amount of apps you can have open and scroll through is 18. After that it’s a total planar collapse. That said, enhancements make it so you’re able to open all of these apps without a problem, without being asked to close another app you can continue opening apps at will, switching to and fro with ease! 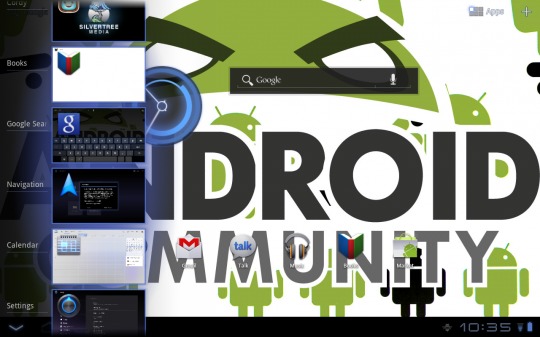 Have a glance at the following benchmarks as performed by yours truly on the XOOM only moments after loading the upgrade to Android 3.1 Honeycomb. If you do care to take a look, we’ve got the same stuff up in the original review for you to compare with. Is the change all that big? Not especially – unless you consider going downward an improvement where a higher number is actually better. 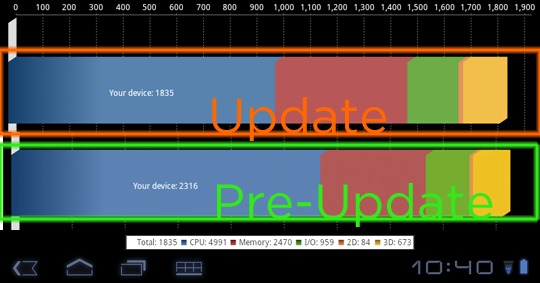 This update claims to be a performance enhancer but in reality, it appears to fix up a few things that mean a whole lot more to those everyday users like you and I. See Motorola XOOM Review [The Big One on Android Community] for more information. 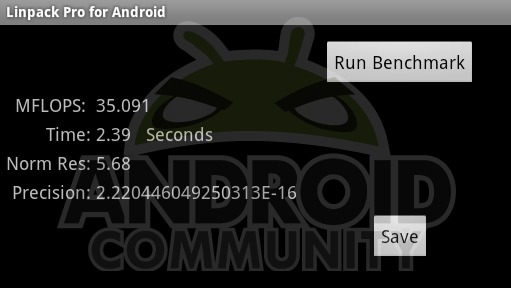 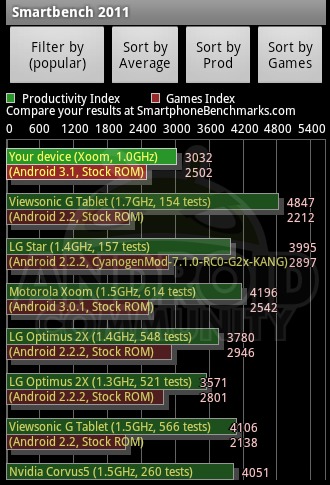 All in all this update is certainly pretty in a couple of places, and we can’t wait to start working with controllers and other peripherals like never before, but it’s no new tasty treat. It’s not an upgrade that’s going to vastly improve your processor speed, you’re not going to blast off into outer space with it. What you will do is get to scroll through your tasks, resize your widgets, and see the shiny new 3.1 in your system information. Fun for all!