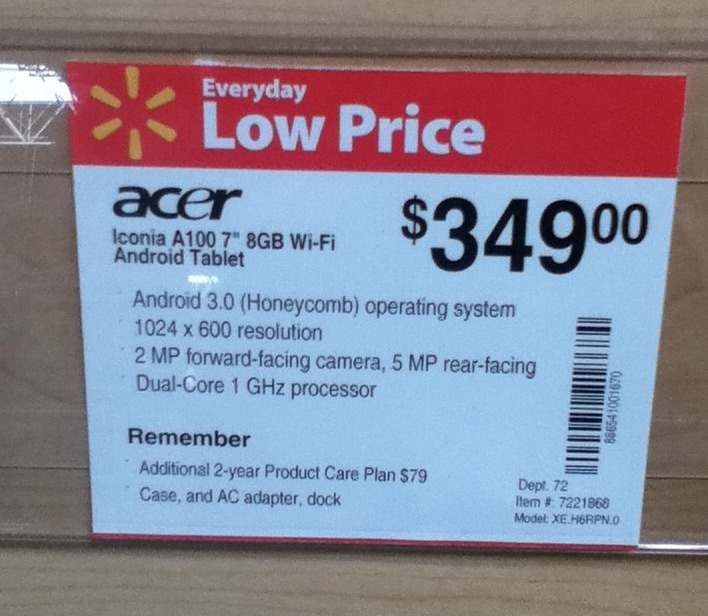 We’ve had some wild adventures with the bigger brother of this Android 7″ tablet, that slightly huger Android device by the name of Acer Iconia Tab A500, a 10″ Android 3.0 Honeycomb tablet. But what about this little monster? What about the littler of the two Androids in arms? Will it never be released due to what Acer says is incompatibility with Honeycomb? Nay says Walmart, we’ll release it no matter what! We’ve got it on sale right this second, says they, and noone will stop us!

Truly Walmart is the knight of the Android distributors, it being home to such wonders as… well… I know the Walmart near my in-laws has absolutely no mobile section at all, with a pithy stack of iPad covers near a case with no iPads in it last I checked. But what is this? An Android tablet, one we’ve been waiting for, no less? Last we heard, this tablet was delayed until the second half of 2011 at the soonest, but now it appears that it’ll be released in time for Independence Day – hooray for fireworks!

Now what have we got waiting for us? Hopefully something as impressive as the lovely A500, the device we reviewed in full a few months ago. Android 3.0, what they’re saying is a 1024 x 600 pixel resolution screen, 2MP forward-facing camera and 5MP back-facing camera, plus a cool 1GHz dual-core processor we can only assume MUST be the NVIDIA Tegra 2. Still no word of when this device will be released, but if this photo is to be trusted, SOON might be a good guess. 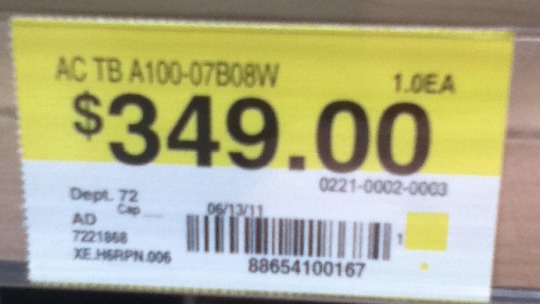 And why would someone want this device? Why, because it’d be the only 7″ tablet running a true version of Android 3.0 Honeycomb, that’s why. While other similar tablets are running their own versions of OS covers or simply outdated versions of Android, this Iconia Tab could be the winner of updates!

Head on down to your local big blue and check if it’s the best day for you to make yourself part of the Honeycomb crew!