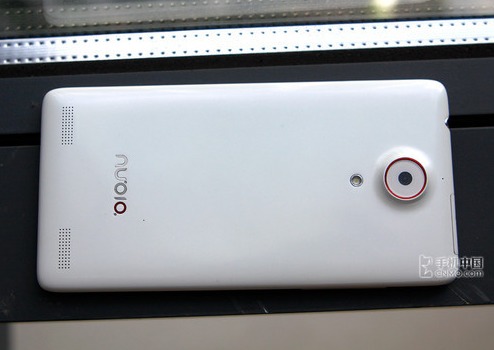 It looks like just about every manufacturer in the game is dipping their feet into the 1080p HD screen waters lately. We’ve heard reports or seen leaks from just about everyone since HTC first released their 1080p DROID DNA. Today we’re getting details on a ZTE flagship 5-inch smartphone to take on Huawei and everyone else in the Chinese markets.

It’s being called the ZTE Nubia Z5 and this 5-inch 1920 x 1080p full HD smartphone is sounding pretty good right about now. Until they can sort out their issues with our government however, this won’t be coming to the states anytime soon. Between the ZTE Apache 8-core phone we reported last month, and now this ZTE is stepping up their game.

According to TechKiddy this Nubia Z5 is a pretty impressive handset, although it has some clear design elements from HTC’s One series, and Samsung’s Galaxy Players with that huge speaker grill up top. Specs feature the Snapdragon S4 Pro 1.5 GHz quad-core processor, 2GB of RAM, a 13 megapixel camera, and dual-speakers on the rear. All of this is only 7.6mm thin too.

As you can see above, even the back resembles those HTC devices we’ve been seeing of late. A little too much if you ask us. We’re hearing reports this flagship smartphone will actually be announced and quickly become available in China starting next week, but we don’t expect it to arrive elsewhere for some time. Quad-core phones and 1080p HD displays are quickly becoming the standard. Stay tuned for more details.